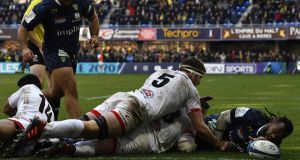 Knowing their quarter-final destiny remained in their own hands was of little comfort to Ulster head coach Dan McFarland in the Stade Marcel Michelin on Saturday afternoon. Gnawing away at the former Connacht man was the sense that a glorious opportunity had passed by his side.

With Clermont having won 30 of their past 31 pool games at home entering the weekend, the size of the task was obvious. But the 29-13 scoreline come the final whistle failed to reflect a game that Ulster could have won if their recent levels of execution hadn’t abandoned them at this most inopportune of moments.

Tries have flowed freely in recent weeks. Yet, with the chance to take a huge step towards what would have been just a third ever home quarter-final, failure to convert opportunities would see them return to Belfast brimming with frustration.

From the very first minutes, when settling only for a penalty when one more pass would surely have brought a score, their possession and enterprise were not to be fully rewarded, double-digits in the turnover column the most telling stat of all.

Even when John Cooney grabbed a ninth score of his memorable season in the eighth minute, there was already a sense that the visitors had to make this purple patch count on the scoreboard. But zero points during Morgan Parra’s sin-binning period undermined such efforts.

With Ulster only 10-9 to the good at the interval, Clermont rallied in the second half with the likes of Alivereti Raka – a try-scorer along with George Moala – coming to the fore while Ulster’s scrum disintegrated.

Although the score stood at just 16-13 with only a quarter of an hour remaining, the direction of traffic gave Clermont’s final flourish an air of inevitability.

“We’re bitterly disappointed,” said McFarland. “It was a game that we had control of in the first half but we didn’t make our pressure pay when we should have done. In the second half it slipped from our grasp.

“You get your moments when you have chances and if you don’t take them in a place like Clermont then that’s it. You’re done.

“We’re right in the middle of one of the most challenging places in Europe to come and play. They had a record crowd here, everything’s bouncing, they’re coming in firing. Lets not underestimate the challenge that we faced but on a couple of occasions we didn’t execute to the level that we needed to.”

With Ulster scoring only three points over the game’s final 72 minutes, the decision-making of skipper Iain Henderson naturally came under scrutiny after three kickable penalties were sent on ultimately fruitless trips to the corner.

“Very few times will you come to a place like this and it comes down to a point or two at the end of the game,” said the lock. “You need to try and back yourself to get points. We backed ourselves and fair play to Clermont, they held us out.

“I suppose it’s hard to know if it changed the whole game, but you cannot say going for the posts before half time would have changed the final result.”

Having begun the pool with four wins from four before faltering at the weekend, Ulster do, at least, have the solace of another crack at qualification for the last eight on Saturday. While the chances of a hosting that knock-out tie are now nothing more than remote, a win of any kind against Bath in Ravenhill on Saturday would secure progression from the pool as a best runner-up, most likely as the sixth seed.

“I just said to them we have one week left,” added Henderson of his message to the squad. “It is all to play for.

“We want to be making the knockout stages, that has been our goal from the start and it is still within our grasp. We have worked hard for the first four rounds in the Champions Cup and let’s not allow those four weeks go to waste by not getting it right next week.

“Boys will be frustrated, upset going back home, but this squad has an incredible bouncebackability. We will be back in first thing training on Monday morning and be as positive as ever.”

That training looks sure to take place without Will Addison however. The fullback’s luckless run over the past 12 months continued with another injury during the second half that saw him leave the stadium sporting on a pair of crutches and surely puts his Six Nations involvement under serious threat.