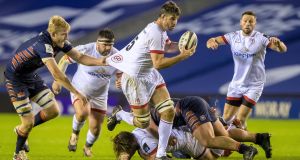 There was never going to be commonality of purpose when it came to team selection for Ulster head coach Dan McFarland and his Munster counterpart Johann van Graan so it was hardly a surprise that they adopted diverse philosophies for what promises to be an intriguing Guinness Pro14 tussle.

The game in Belfast is mercifully free of Covid-19 issues that have impinged upon the build-up to the other interprovincial as two Leinster and an undisclosed number of Connacht players tested positive and are self-isolating along with close contacts.

Ulster’s two defeats in the Champions Cup to date render Europe a more peripheral consideration whereas victories in their next two league matches including Friday week’s clash with Conference A rivals Leinster, would propel McFarland’s squad significantly closer to a final place in the abridged Pro14 tournament.

Even allowing for the latitude afforded by the postponed Leinster match, van Graan needs to husband his resources a little more judiciously across two competitions as he weighs up teams selections for next weekend’s game against their main Conference rivals Connacht in Galway, followed by return European fixtures against Clermont Auvergne and Harlequins.

In straight line terms, the least important result from a Munster perspective is what happens in Belfast. It doesn’t mean that they’re travelling without expectation but it has permitted flexibility in selection to accommodate the constraints of the national player management programme.

Hooker Niall Scannell and replacement prop Dave Kilcoyne have yet to play a match this season while Liam O’Connor, another bedevilled by recent injury, has managed 21 minutes in two appearances. Garryowen wing Liam Coombes makes his Munster bow for the season.

Shane Daly is the only survivor from the team that started that epic 39-31 victory in Clermont and he switches from left wing to fullback; albeit that seven of the bench make the run-on team. Jack Crowley, a prodigious talent and standout player for last season’s Ireland Under-20s, is set to make his debut off the bench.

There promises to be some very interesting personal duels and while the team dynamic may help to frame who gets the upper hand, it’ll be interesting to draw comparisons, to weigh up for example how the respective outhalves, Ben Healy, happily recovered from a shoulder injury sustained against Harlequins, and Burns manage the game.

The tussle between the effervescent tyro Craig Casey and a perennial Ulster talisman Cooney will be instructive both in terms of the match and for the watching Ireland coach Andy Farrell. Interprovincial matches facilitate a reordering of the national depth chart.

Munster are unbeaten in nine matches, seven in the league and two in Europe and perhaps that’s why the bookmakers are slightly wary, making van Graan’s side just seven-point underdogs, at a venue where Ulster’s last league defeat was against Connacht in October, 2018.

The visitors will be fiery and feisty and if they remain true to their more expansive principles will ask plenty of questions but ultimately Ulster, bolstered by a closer approximation of a full strength team, should prevail.