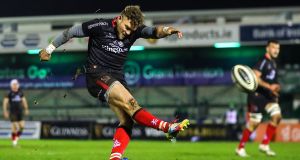 Ulster’s Ian Madigan kicks a penalty in the Guinness Pro14 match between Connacht and Ulster in the Sportsground, Galway on Sunday. Photograph: James Crombie/Inpho

It had been a difficult week for Ulster off the pitch, with confirmation that Marcell Coetzee has asked to have the final season in a three-year contract rescinded so that he could return to South Africa and join the Bulls in July. But on the pitch the players have represented the Irish province with tremendous resolve.

Despite a ridiculously long injury list and the absence of their current Irish international contingent, Ulster travelled to Galway, where they eked out a 32-19 victory that took them seven points clear of Leinster at the top of the Conference A table having played two more matches.

The decision by the Bulls to announce Coetzee’s capture on Christmas week came as a surprise. Ulster chief executive Jonny Petrie articulated his frustration at losing an outstanding player, and there were plenty who took to the social media channels to express anger.

The 29-year-old Springbok offered an explanation in a statement. “It all started during lockdown when I [went] back home for four months. My wife and I did a lot of thinking together about life and we also reflected on where I am in my career.

“We decided to come back to Belfast with an open mind, but ultimately we miss home, the South African culture and way of life; after five seasons the longing for home has just caught up with us.”

It’s hardly an unreasonable stance when weighed alongside the current Covid-19 pandemic, pay cuts and deferrals and, from a rugby perspective, the prospect of playing for South Africa against the Lions next summer. It’s disappointing to lose a player of his calibre but no one can question the integrity of performance with which he embellished the Ulster jersey.

Ulster has acquiesced to his request and will release him from the third year of the contract he signed in 2019. Given the timing, it could have been a distraction as Dan McFarland’s side headed for the Sportsground, but the playing group put everything to one side and produced a gritty performance to maintain a 100 per cent record in the Pro14 with a ninth successive victory.

Despite trailing 14-9 at the interval, a margin that could have been wider, they regrouped and dominated after the interval. Jordi Murphy was a deserved man of the match but he’d have been run close by Ian Madigan, the outhalf chipping in with 22 points from the kicking tee, in arguably his most assured display since joining from Bristol.

Speaking to Ulster TV, Madigan admitted: “That was a very sweet win. Away wins around Christmastime are very hard to come by. Guys were challenged by the coaches to physically step up to the challenge and I thought they did that brilliantly well. It was a pleasure playing behind that pack. Credit to the forwards – they are the ones that earned that win for us.

“I have played here a few times and, when the wind is going in the same direction as the slope, it is very difficult to play into. I thought 14-9 at half-time was a brilliant result for us. We were really energised in the changing room at half-time. We had a clear game plan going into the second half and if we executed well the game was there for the taking. We certainly took the opportunities, Nick Timoney with a great break, Jordi Murphy sneaking over for a try and then we kept the foot on the throat and ultimately got the win.

“Connacht are a really good side, they had a lot of internationals out there. It was a really challenging game and I was just delighted that we came out on top.”

Over the next two weekends Ulster will face conference rivals Leinster at the RDS on Friday week but first, next Saturday, will host Munster at the Kingspan stadium.

Ulster, Munster and Leinster are unbeaten in the league to date and, with the season shortened to 16 matches with a final to follow in March, contested by the two teams that top the respective conferences, it seems probable based on results so far that Munster will face either defending champions Leinster or Ulster in the decider.

The next fortnight will help to frame that picture and, while Madigan and his Ulster team-mates were right to savour the win over Connacht, a stiffer assignment awaits on Saturday evening in Belfast. He said: “It is nice to be getting back home after two games on the road.

“Munster’s a team that is going well; credit to them with two great wins in the European Cup, but we know that with the way that the league has unfolded this year that’s [Connacht game] a really important win. We need to keep the pressure and see if we can go 10 in a row [next Saturday].”

Guardiola insists Man City’s success mainly down to players, not his coaching 22:30
How Thomas Tuchel hit the ground running and got Chelsea back on track 22:30
Top-four finish would be a big achievement for Liverpool, admits Klopp 22:30
Ulster see off Ospreys but miss out on a bonus point 22:25
Joey Carbery’s cameo seals Munster win over Cardiff 22:16
Here is your handy guide to sport on television this week