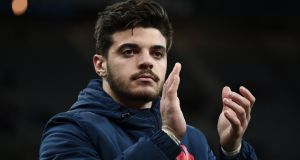 Toulouse and France outhalf Romain Ntamack has suffered a double fracture of the jaw in the Top 14 win over Bordeaux and could miss a string of matches for club and country. Photo: Philippe Lopez/AFP via Getty Images

France’s preparations for the 2021 Six Nations have suffered a significant blow after the outhalf Romain Ntamack revealed he has sustained a double jaw fracture. Ntamack requires surgery and is likely to miss the start of France’s championship.

The 21-year-old was among the shining lights of this year’s competition and was on the shortlist for player of the championship, forging an impressive half-back partnership with his Toulouse teammate Antoine Dupont, but France are set to begin their campaign away to Italy on February 6th without him while Ireland welcome the French to Dublin the following weekend. He did not feature in France’s extra-time defeat in the Autumn Nations Cup final defeat by England with Matthieu Jalibert deputising and the Bordeaux outhalf would again be the frontrunner to replace him for the start of the Six Nations.

Ntamack is also set to miss Toulouse’s trip to Exeter in the Champions Cup next month – a match the Chiefs will need to win well to have any realistic chance of progressing to the knockout stages. Reports in France suggest the layoff could be up to two months.

Revealing his injury on Twitter, Ntamack wrote: “Following a blow to the jaw which occurred in the first half of the match between Toulouse and Bordeaux the examinations show a double fracture of the jaw. I will have to undergo an operation and be away from the field for a few weeks.”

Meanwhile, Newcastle and Bath have both been awarded four-point wins for their cancelled St Stephen’s Day matches against Leicester and London Irish respectively. The two matches were called off following Covid-19 outbreaks among the Tigers and the Exiles, who have both received two match points in accordance with new Premiership regulations introduced this season.

All Premiership clubs were due to be tested on Monday with a decision on whether London Irish v Northampton and Leicester v Bath can go ahead this weekend, along with the other four fixtures, dependent on the results.

Newcastle have now prevailed in all of their four matches since returning to the Premiership and though the results go down as 0-0, the wins for them and Bath could prove significant given that number of victories is the first tiebreaker if teams are level on points. Newcastle are scheduled to return to action on New Year’s Day away to Bristol but that match has been moved from an evening kick-off to 3pm due to the anticipated bad weather. – Guardian