Ulster expect to play on without crowds in Belfast 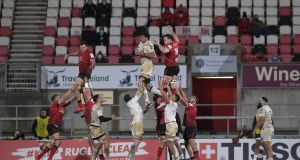 The Kingspan stadium will be closed to spectators for Ulster’s games against Munster and Gloucester. Photograph: Charles McQuillan/Getty Images

Ulster do not expect any disruption to their January fixtures despite the strict lockdown measures coming into effect on December 26th.

No crowds will be permitted inside the Kingspan stadium when Munster come to Belfast on January 2nd and Gloucester visit for round three of the Champions Cup on January 16th.

“There is an exemption for elite sport training during the initial stricter set of measures set out for Northern Ireland, so our Connacht game [on December 27th] is unaffected,” explained an Ulster spokeswoman. “The Munster game will be played behind closed doors.”

However, the current travel restrictions to and from the UK will deny Stuart Lancaster time with his family over Christmas.

“The last thing you want to do is start complaining when you’ve got people who’ve obviously are in a far worse situation than me,” said the Leinster coach who divides his time between Cumbria and Donnybrook.

“The reality is I came over here in July and I’m pretty much on my own for six months. It’s not ideal but the last thing I want to do is give out because there are people in a lot worse situation than me and my family so it is what it is.”