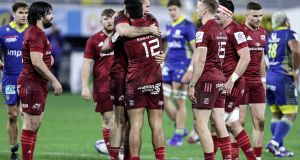 Munster players celebrate at the final whistle after their victory over Clermont Auvergne in the Heineken Champions Cup at Stade Marcel-Michelin. Photograph: Laszlo Geczo

Knowing me, knowing you. Stuart Lancaster on Johann van Graan provides as much goodwill as the South African’s response to the Cumbrian’s praise.

Lancaster would have enjoyed the spin down to Limerick on Saturday if it wasn’t for the announcement on Thursday that the match had been postponed. In a statement, Leinster said they were “investigating the outcomes of some of the results from their latest round of Covid-19 PRC testing and the results of these investigations will not be returned in time to meet guidelines set by public health authorities in order for the game to go ahead as planned.” Unless the former England coach managed to ‘bubble up’ with a Leinster colleague, the 51-year-old father spent Christmas Day alone in Donnybrook.

Equally, Van Graan must feel awfully far from Pretoria this winter but Munster’s monumental victory over Clermont Auvergne in Stade Marcel-Michelin allows him to sit alongside Lancaster during this festive season.

Up until last Saturday’s result, Munster, when it really mattered in 2020, had been poor and unlucky in equal measure.

At least the rise of local hard men like Gavin Coombes and Josh Hodnett, with Thomas Ahern potentially filling the RG Snyman void before season’s end, has put the Van Graan experiment in Limerick on a solid track.

Most impressive of all, Munster’s game is evolving into a discernible style.

“Take the two games we played post lockdown at the Aviva,” said Lancaster on Tuesday before the game had been postponed. “[The first] I think was 27-25 to us, tight game, Munster got some really good tries near the end after we managed to get ahead early doors. But you could see they were playing with more width and variety in attack.

“Less so in the second game but from that point onwards the integration of younger players and the energy they brought to the team, particularly during that period when the senior internationals were away [was visible].”

Munster stank out the Aviva stadium in that Pro 14 semi-final loss to their neighbours, reverting to a box-kicking performance that depressed even their most ardent patrons.

Improvement has been incremental but nobody envisaged them catching Clermont. Perhaps that includes the coaches until it was blatantly obvious that Peter O’Mahony’s men had broken the French pack’s spirit with JJ Hanrahan repeatedly kicking to the corner.

“I think it is not just [the Clermont] game but an accumulation of wins they have had since we played them last,” Lancaster continued. “They have dug in on various occasions and got across the line, none more so than the weekend just gone, but that is typical of the confidence and the form they are in.

“I thought the Harlequins game was a really good performance as well. Harlequins definitely came [to Limerick] – the Jerry Flannery factor probably – to do well in Europe. I think we saw the effect this week on Harlequins when they got beaten quite comfortably at home to Racing. They put a lot into that game and Munster beat them quite well.”

On several occasions during the three years since Van Graan was parachuted into Munster, to replace Rasssie Erasmus and Jaco Nienaber, the 40-year-old appeared to presume that the gap was closing between red and blue. He knows what Leinster are now.

“If you look at the best teams, not only in rugby but across sport, they are always ahead of the curve,” said Van Graan. “They’ve changed a lot of their plays. They’ve changed the way they attack and they way that they defend. They’ve certainly added to their kicking game. They are ever evolving and that’s why they are such a difficult team to beat. They are always coming up with small little things. I think that’s why they are so good.

“Firstly, because they’ve got continuity, not only in the coaching group but the playing group. They’ve got an incredible depth of young players coming through.

“A few years ago they caught a lot of teams with changing direction. At this stage, they’d working hard the same way and they’re actually out working players and then one thing that I’ve got to say about Leinster, they’ve got world class basics.

“Their breakdown is excellent, their running lines, their tackle technique . . . so that’s why they are the champions and that’s why they’re top of their pool in the Champions Cup because they’re a championship team.”

Undoubtedly, Munster and Van Graan gained a valuable lesson from their limp defeat to Leinster last August (when they never seemed so far away).

“Look, we’re a year down the line with Steve [Larkham], JP [Ferreira], Graham [Rowntree] and I together with George [Murray]. Hopefully when we talk a year from now, then hopefully we’ll be down the line even more.

“Everybody’s pulling in the same direction: players, management, coaches and as a club. Certainly over the last nine games I believe we’ve grown our game.”