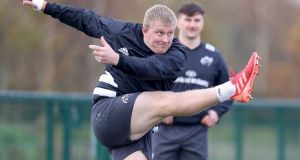 John Ryan fully appreciates the imperative of a scrupulously sanitised rugby environment when it comes to maintaining his health in the current Coronavirus pandemic.

The 32-year-old Munster prop suffers from Ulcerative Colitis, a condition where his immune system thinks that food, normal gut bacteria and the cells that line his colon, are intruders. The white blood cells that usually protect a person attack the lining of the colon, the result, inflammation and ulcers.

He’s previously spoken about the issue, going to hospital every eight weeks as a day patient and a requirement to take tablets on a daily basis. Ryan was asked whether his medical condition rendered him more vulnerable to Covid-19.

“It does. I would be one of those at risk people. I was told by my doctor at the start, and as we were just getting back into things, to be careful and to possibly not go back so soon but I just came back when everyone did and took those extra precautions.

“I made sure that I (was) surrounded (by) people that I could trust, like my family and stuff like that. There was no going out into the public as much. I was just being a bit extra careful but I have been pretty good so far anyway.

“People can get complacent around the place but we are pretty safe around here (the Munster environment) and hopefully it stays that way. Going forward hopefully we don’t have to risk assess as much in the next few months.”

His rugby focus, beginning with Saturday’s Guinness Pro14 game against Ulster at the Kingspan Stadium (5.15pm), is to try and establish a firm grip on the number three jersey with Munster. The last time he started a match for the province was in September, his most recent appearances, including two European matches, were as a replacement.

He’s enjoying a shift in Munster’s patterns which has facilitated a hugely impressive unbeaten start to the season in both the league and Champions Cup. “They’re [the coaching group] challenging everyone to get their hands on the ball whereas before we would have had, I wouldn’t say it was nominated ball-carriers, but there were lads who put their hands up more than others to carry.

“We’re playing more of a wider game, I suppose, and they’re just challenging frontrows as well as backrows to get on the ball equally, forgetting about that old way that we probably went about things when we had the CJ Standers, the Jean Kleyns and Dave Kilcoynes carrying the ball.

“But that’s kind of gone now that we’re really pushing ourselves to get everyone on the ball and just create more threats around the pitch. Everyone’s enjoying their rugby in Munster this year. I think with the young lads coming through it makes it very exciting, for me anyway the competition is making it very exciting as well when you’re looking over your shoulder, with myself, (Stephen) Archer, Keynan Knox and Roman Salanoa fighting it out for a position; it’s brilliant.”

The licence to be more ‘hands-on’ reminds him of his days in UCC, a mere slip of a lad at 112kgs, running around and racking up 20 carries a match.

Excelling in a red jersey is a conduit to a green one and Ryan is keen to add to his collection of 23 Ireland caps. Having undergone surgery his goal during the first lockdown period was to force his way back into the national set-up. “I was probably a bit disappointed.

“I made a goal in lockdown to work hard. I got in there (Ireland squad) and I felt like I had all the momentum but that it was just stopped in its tracks by not getting a nod for the first how many games? Six? I only got in for the last two games so it stalled a bit.”

Few players are enamoured with coming off the bench so starting slots are much coveted and for Ryan, Saturday should present that opportunity. He watched the Ulster scrum struggle in the first-half of their victory over Connacht at the Sportsground last weekend but is too experienced and knowledgeable to pay much heed.

“Everyone has those days,” he said, recalling one of his own when he came on after 10 and was replaced after 70 minutes. Ryan continued: “They’re (Ulster's scrum) going to definitely bounce back.

“I know they’ve a good scrum, they have the players there, so it’s an area they’re going to target this week and they won’t be any pushover because they got shoved around the place by Connacht.”