Could head coach look to rest players in Europe and focus on a title challenge? 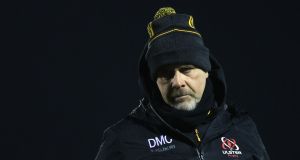 Ireland’s national player management programme requires nuanced juggling of resources, a state of affairs with which the provincial head coaches are reasonably well versed at this point.

Ulster head coach Dan McFarland might have a little more wriggle room, although he wouldn’t want it to be that way, as he prepares for pivotal Guinness Pro14 matches against Munster at the Kingspan stadium on Saturday evening and six days later a clash with Conference A rivals, Leinster at the RDS.

Two defeats in the Heineken Champions Cup pool stage - they currently lie ninth of 12 teams on three points in Pool B - and with upcoming matches at home to Gloucester and away to Toulouse, a realistic ambition is to try and make the quarter-finals of the Challenge Cup.

If Ulster were contending for a top four place in the European table then the onus would have been to go full loaded personnel wise when the tournament resumed next month but there isn’t that same pressure and instead there is some justification to prioritise the Pro14 is terms of fielding the strongest possible teams.

McFarland’s squad has won all nine matches to date, currently lie seven points ahead of Leinster having played two games more, and over the next fortnight face two matches that will go a long way to defining a season where the league title will be a straight final between the two conference toppers following 16 rounds of games.

Ulster’s extensive injury list - Sean Reidy is the latest with a shoulder issue - makes things a little trickier but no one would blame McFarland for keeping his counsel on selection for Saturday evening’s game in Belfast. He said: “There were guys who were having their break after being on international duty and they will drift back in as the week goes on and start training with us.

“We will make a decision on whether they will play and in what capacity they take part when we firm up selection.”

Do Ulster have a better chance of beating Munster in Belfast or Leinster, the team with whom they are disputing conference honours, in Dublin?

They may be able to have a proper cut off both tasks, especially as Munster and Leinster, both unbeaten in Europe, will have to mix and match repatriating their respective international contingents over the next fortnight.

From an Ulster perspective the focus is clearly on the next task, one which McFarland acknowledges is formidable as they take on an unbeaten Munster team, Johann van Graan’s side fresh from a brilliant win in Clermont.

He said: “It was really impressive the manner of their victory. Munster are never going to stop fighting, so it wouldn’t have mattered what the score was after 30 or 40 minutes. Their ability to score points as the game went on and gradually build pressure got them (Clermont) worried.

“The variety (in attack) in their game is impressive; that is across the board, they are not relying on any one player. A lot of their forwards are looking like real ball players. They’re attacking as well as any team in the league at the moment.”

Brooks Koepka seizes initiative in Florida as Rory McIlroy stalls 23:30
FAI boss envisages fans in the Aviva for Euro 2020 finals 23:00
Guardiola insists Man City’s success mainly down to players, not his coaching 22:30
How Thomas Tuchel hit the ground running and got Chelsea back on track 22:30
Top-four finish would be a big achievement for Liverpool, admits Klopp 22:30
Here is your handy guide to sport on television this week