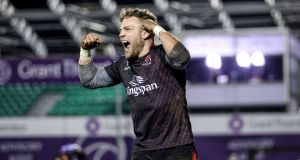 Ulster succeeded in consolidating their lead at the top of Conference A with a comfortable victory over Connacht in Galway on Sunday.

It was the first time in five years that Dan McFarland’s side has left the Sportsground with a victory and they were deserving winners after taking control of the second half, posting 23 points, and limiting Connacht to a single try.

This was a big statement from Ulster. Missing 17 players, including a raft of big-names, they produced a display of real energy, particularly in defence, which stymied Connacht’s best efforts, while Ian Madigan posted 22 points through his boot.

If Madigan was near flawless with his kicking, the pack was dominant, particularly at the breakdown in the second half, denying Connacht front-foot ball in the right areas.

Connacht head coach Andy Friend described the result as a “massive defeat” in terms of their ambitions this season.

“I thought at half time the scoreboard probably was not a reflection of the first half, unlucky not to get a penalty try, but we were quite comfortable at half time, and I thought we would bring it home, but we didn’t do it.”

Connacht had won the toss and chose to play with it in the first half, he said, not realising it would change as much as it did.

“Conditions did turn which made it hard to kick and that was the frustrating part of the night. We needed to pinch another try, which would have been a bonus point, but again we lost that, so no Christmas present there.”

Instead, he said Ulster should be proud of themselves.

“They were the better team. We were on top and we allowed them easy access. There was some frustration there, penalties given and you give themselves three points. They were clever.”

Ulster’s Dan McFarland was delighted to get the win particularly “with a lot of young players” involved.

“At half time the message was that we could not afford to give them any space - to keep the pressure on.”

And that is exactly what Ulster did after a tough week in which the big news was losing Marcell Coetzee to the Bulls. They overturned a Connacht lead, took the game by the scruff of the neck, and strangled the home side in the second half.

It was a turnaround in fortunes as Connacht were deserving of their 14-9 half-time lead, dominating possession and territory, and although Ulster had offered little in attack, they had kept themselves in the game with an impressive defence.

The first score came after just two minutes when Connacht were pinged for not rolling away in the tackle, and Madigan made no mistake from the 10m line to open the scoring and, after enjoying the better of the breakdown exchanges, the outhalf added a second for a 6-0 lead after 10 minutes.

However, Connacht found some rhythm soon after, going through the phases but were held up on the line by an aggressive defence. Eoghan Masterson came close to scoring a try on his 100th game for the province, while both Ultan Dillane and Denis Buckley were stopped short. And when three successive scrum penalties still failed to yield a score, Caolan Blade opted to send the ball wide and it was Jack Carty who dived over in the right corner, adding the conversion for a 7-6 lead after 22 minutes.

Within two minutes Madigan struck his third penalty after Connacht failed to release in the tackle, but the lead was short-lived. The home side, working hard on the deck, earned a penalty to gain territorial control again. Content once again to go through the phases, and continue hitting the line at pace, they were able to withstand the hard-hitting Ulster defence. Opting for long delivery again, they got in behind and John Porch was the willing recipient who dived over in the right corner. Carty’s conversion put Connacht into a 14-9 lead after 26 minutes.

Ulster, enjoying a rising wind in the second half, were able to turn the tables in the opening nine minutes. From a penalty to touch, Ulster’s pack was stymied at first, but Alby Mathewson proved pivotal. Breaking a tackle to bring play up to the line, Jordi Murphy eventually bagged a crucial try, with Madigan adding the extras to take the lead for the first time since the 21st minute.

They then made their dominance count with some aggressive carrying, and with Mathewson directing operations, Ulster’s big men were able to break through a couple of tackles, with Nick Timony charging through for the second try to extend the lead to 14-23.

Connacht, however, carved a real opportunity from a penalty to touch to give them some hope. Following some excellent work by Blade, the ball was eventually put through the hands and Tom Daly, with an angled run, did well to push off the tackle and touch down.

Connacht will feel hard done to have conceded a penalty at the breakdown, and Madigan added the consequential points to extend the lead to 26-19. But McFarland’s side continued to dominate territory and the breakdown. Although Madigan missed a 70th minute penalty, he added a three-pointer four minutes later to extend the margin to 19-29.

As Ulster maintained all the momentum, Connacht struggled to exit their own half. Madigan added his fifth penalty after 79 minutes, while Ulster scuppered one last Connacht chance, turning over possession at the lineout in the last play.