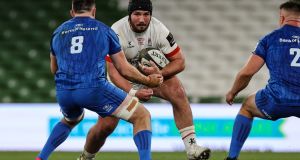 Tom O’Toole in action for Ulster against Leinster in the PRO14 final at the Aviva Stadium. “Their [Munster’s] confidence is going to be through the roof coming up to Kingspan.” Photograph: Billy Stickland/Innpho

Sporting pathways are rarely smooth and invariably contain obstacles that impede or slow progress. Selection and injury represent the most common speed bumps.

Tom O’Toole will start on the bench for Ulster as they welcome Munster to the Kingspan Stadium this afternoon (5.15), two teams unbeaten in the Guinness Pro14 this season and in the case of Johann van Graan’s visitors that extends to Europe, having won their opening brace of Heineken Champions Cup ties.

The 22-year-old tighthead prop is just four games back from an ankle injury sustained in last season’s Pro14 final defeat to Leinster in August, three as a replacement and then last weekend he started for the first time in a 32-19 win over Connacht at the Sportsground.

It was not the first time injury had intervened – he was ruled out of a World Junior Championship tournament with the Ireland Under-20s – but since then had a largely uninterrupted run by his reckoning, the high point of which was receiving a call-up to Andy Farrell’s extended Ireland squad last February.

It recognised and rewarded talent and consistent excellence while also vindicating a decision O’Toole took as a teenager. Born in Drogheda, the family moved, because of his father’s work commitments, to Brisbane in Australia via Meath, where they spent 10 years.

Having played Gaelic football, in Brisbane he gravitated towards Aussie Rules, where he soon appreciated he didn’t possess the body type, and soccer. But in the latter they kept putting him in goal so he lost interest. Having dabbled occasionally in a little Rugby League, it was its union cousin that provided the perfect sporting outlet.

He was selected for the Queensland Schoolboys side and would probably have gone on to play for Australia if one of his coaches, Johnny McMurray, had not alerted the IRFU through the Exiles system. Returning to Ireland for a holiday, Ulster academy manager Kieran Campbell invited him for a chat, the upshot of which was an offer when he finished school in Australia to go to university and play rugby in Ulster.

The pair kept in contact and a couple of months later agreed that it might be better if he finished his schooling in Ireland and so with his family in Australia he accepted a place in Campbell College. There was an acclimatisation period required as he recalled in an interview back in 2018.

“I remember my first night in boarding school, sitting there, looking out the window and thinking, ‘Oh my God, how did I end up here?’ It was just overwhelming meeting so many people and there is pressure. You don’t want to be going back to Australia having not made it or just done two years in school and then not working out, so the first month hit me hard.

“I was missing my family a wee bit but I thought that if I was going to do this then I had to give it 100 per cent. I couldn’t keep thinking about my friends back in Australia or what was going to happen. I just had to play well for my school and hopefully go into the academy system in Ulster and luckily enough it all worked out pretty well.”

That’s a wee bit of an understatement as he quickly moved through several levels of underage representative rugby provincially and nationally. As an aside, it was reported recently that his agent had been contacted by Rugby Australia to see if O’Toole had any plans to return to Down Under. He doesn’t.

O’Toole’s first Irish cap is unlikely to be too far away if he can recapture the form of the last couple of seasons. He was voted Ulster’s Young Player of the Year for the 2019-2020 season, one in which he played 38 matches.

“Eric [and I] came through the academy together; we are best of mates. When you are a prop you spend most of the time together. You understand what the other is going through; you live a similar enough lifestyle.

“It is so exciting to have him doing so well. It’s very exciting to see what the future holds for us. Eric is exceptional, very talented and it’s going to be exciting to work with him for many years to come.”

O’Toole will be hoping to reprise that on-field relationship at the Kingspan Stadium this afternoon.

Against Connacht, the Ulster scrum struggled initially before resuming a more even keel. O’Toole explained how they sought a fix.

“We have those micro chats on the field. I would talk to the hooker, my secondrow behind me [highlighting that] we are going to hit and build pressure.

“We don’t want anyone’s feet moving behind us because ultimately when people lift their feet that’s when weight comes off and allows the opposition to get a bit of momentum. Micro chats during the game are the key to unlocking how to fix whatever process you are doing. It’s about having a couple of scrums seeing what they are doing and then maybe changing the game-plan depending on what tactics they are using.”

“They have been playing an unbelievable brand of rugby, expansive and open and a little bit different from what we usually see from Munster. We know how dangerous they can be and [they] are coming off a great win against Clermont away; their confidence is going to be through the roof coming up to Kingspan.”

O’Toole would like to be there at some point, front and centre.