Ross Byrne has recovered from dead leg ahead of Munster derby 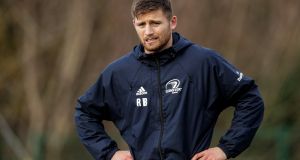 Ross Byrne is expected to return to full-time training ahead of Saturday’s derby. Photograph: Laszlo Geczo/Inpho

Ross Byrne has recovered from a dead leg he sustained in the victory over the Northampton Saints at the Aviva stadium and is expected to return to full-time training ahead of Leinster’s Guinness Pro14 game against Munster at Thomond Park on Saturday (6.0).

His younger brother Harry started and impressed at outhalf in Leinster’s victory over Ulster but Ciaran Frawey might get the number 10 jersey this week against Munster as Leo Cullen rotates his squad through the three interprovincial matches in the Pro14 over the Christmas and New Year.

Josh van der Flier picked up a head injury when coming on as a replacement against Ulster and didn’t return to the pitch. He is following the return to play protocols. Secondrow Ross Molony has recovered from a foot injury while Joe Tomane (hamstring) will look to increase his training load this week.