The Offload: Tough afternoon for Ulster’s best 10 of the decade 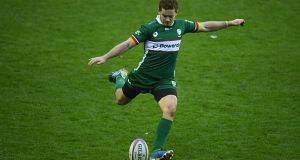 Ulster’s best 10 of the decade

Paddy Jackson hobbled off the pitch in London Irish’s match against Bath on Sunday. It ended badly for the former Ulster outhalf and it ended badly for London Irish. England internationals Anthony Watson, Jonathan Joseph and Sam Underhill all started against the Declan Kidney coached side.

Jackson pinged his hamstring defending the second try in a poor outing for the Exiles, who lost 10-38 in the Premiership match, which will erode their mid table position. Playing now with his former bosses from the Irish set up, Kidney and Les Kiss, Jackson can at least take some comfort from a recent poll by the Belfast Telegraph on the Ulster rugby team of the decade. Jackson was the clear winner at outhalf drawing 89 per cent of the vote to just six per cent for second placed Ian Humphreys and five per cent for Billy Burns.

Interestingly the Dublin born Eric O’Sullivan, who found himself on the outside looking in when Leinster academy places were handed out and has only played 34 times for Ulster to date, beat Tom Court and Callum Black to the loosehead position with 53 per cent of the vote. Jackson played at fullback against Bath, clearly to no avail.

High or not high

It is never what anybody wants to see or hear on a rugby pitch. But yes those were screams of agony that you might have heard when Angus Curtis went down at around the 51st minute in Ulster’s Pro14 league game against Leinster on Saturday.

Curtis, typically taking the ball into Leinster contact at high speed was met with the immovable force of former Wallaby secondrow Scott Fardy.

It was one of those tackles where the ball carrier is just stopped stone dead in his tracks, and flattened with an accompanying almost audible wince from the festive crowd in the RDS.

Whatever way Fardy hit Curtis in the tackle, the game was held up for some time with the Ulster centre leaving the pitch on a stretcher with what looked like a horrible knee injury.

Referee George Clancy was on hand to rule that Fardy’s tackle was not illegally high as many people might have thought watching it take place in real time, and as Curtis writhed in pain on the ground.

But that certainly wasn’t the view of Ulster coach Dan McFarland after the match. While McFarland, who is a thoughtful individual, said that he did want to take another look back at the Fardy hit, he also did question the legality of the lock’s defence in the incident.

“We’re really disappointed for him. It’s gutting for him,” said McFarland about his injured player. “He got injured in a tackle that looked high to me. George didn’t think so at the time. I haven’t had a chance to look back at it.

“A typical situation for Angus, carrying the ball into the teeth of a defence at 100 miles an hour and showing no fear. We’re gutted for him but that’s typical of the man, showing that.”

High or not high. How many times is that question asked these days.

Fergus McFadden probably wondered why Leo Cullen and Guy Easterby had dragged him along to the press conference staged last week in Ireland’s most famous stout factory at the Guinness brewery in Dublin. It was the first time the 33-year-old international had appeared at a press conference for some time having been sidelined with an elbow injury he suffered in November.

But McFadden was hardly asked a question as Leo Cullen fielded queries about reports in the media that Johnny Sexton was again drawing attention from French clubs and whether there was a possibility of him leaving Leinster.

Cullen was also asked about fullback Rob Kearney and how newly installed Irish coach Andy Farrell overlooking him will impact on his ability to help Leinster to another European Champions Cup final - or Ireland in the future.

Cullen was also asked about Harry Byrne at outhalf and how as the senior coach he manages the competition between Harry and his brother Ross, both of them hoping to nail down the 10 position when Sexton isn’t playing. Does he just let them fight it out like brothers do. All the while McFadden politely sat there answering the odd harmless question and allowing Cullen to manage the conference. All that silence.

On reflection we know what McFadden might have been thinking and it goes something like this. ‘if I get the ball in my hands and there is space out wide on the wing, I think I’ll probably try an outrageous cross field kick towards Robbie Henshaw and Cian Kelleher. ’

And look how that turned out.

5,000 - If like many people you watched the Connacht v Munster match in a saloon bar you might have wondered what the fans wearing high vis vests was all about. It was a successful world record attempt for the Be Bright on Safety campaign. They doubled the previous record of 2,499.

“Lots of distractions this time of year. The game was almost a mirror image of that. Lots of distractions going on, lots of pieces going on. We probably lost our focus there. It’s important we get our minds back to the challenge at hand.” - Leo Cullen having a shot at explaining the 54-42, 96 point scoreline in the RDS.