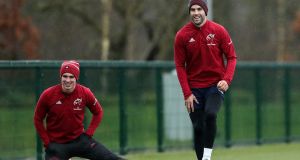 Joey Carbery might, at a push, make his first appearance for Munster since last May’s Guinness Pro 14 semi-final loss against Leinster at the RDS when the old rivals meet again at Thomond Park next Saturday (6pm).

This time last year Carbery was very much the man in situ for Munster, enjoying a run of games which included a 16-point haul in their 31-24 win over Connacht at the Sportsground. In his stead, it was JJ Hanrahan who kicked five from five for a 14-point haul in Munster’s 19-14 win in front of a sell-out 8,129 crowd at the Galway venue on Saturday night.

Hamstring and, latterly, ankle issues have restricted Carbery to just two appearances for Munster since last January, and just half a dozen games – three off the bench– for province and country since last February.

Thankfully, the 24-year-old is nearing full fitness again after being sidelined since the World Cup with a recurrence of the ankle injury he sustained in the opening warm-up game against Italy last August.

“It’s possible,” said Johann van Graan when asked if Carbery might feature against his former team next Saturday. “A few things still need to go right. He did a bit of training with us on Thursday and obviously he’ll go to the ‘stocktake’ of the national team tomorrow and then we won’t train again after Monday until Thursday, so we’ll see him back on Thursday and then we’ll make a decision on his availability.

The one thing that Joey knows is he’ll have to fight his way back into the team, possibly from the bench

“I’m not going to put him on the field if he’s not 100 per cent right so we’ll make that call if the call is in our hands on Thursday. What I mean by that is if he keeps improving day in, day out.

“From an excitement point of view, I think everybody in the group is looking forward to Joey coming back,” added Van Graan, before then saying of Hanrahan: “I think JJ’s done really great – I think he had an excellent game out there.”

“The one thing that Joey knows is he’ll have to fight his way back into the team, possibly from the bench. He can also play fullback, so there’s a few options available for us. If and when he becomes available, I am really looking to get him back into this team.”

Hanrahan is benefiting from having his longest stint of successive games at outhalf in his career to date, this being the sixth time in Munster’s last eight games in which he’s worn the ‘10’ jersey.

It showed in his composed performance at the Sportsground on Saturday, when Hanrahan’s tactical kicking in continually finding grass in the Connacht backfield contributed to them dominating territory and quelling Connacht’s spirit, especially in the second half.

Charting how Ian Keatley, Tyler Bleyendaal and Joey Carbery have been the first-choice outhalves above Hanrahan in turn until this season, Van Graan added: “We got a few injuries in that part of the team and I think Stephen [Larkham] brought in some new ideas at 10. As a 10, if you can get someone to come and coach you who has played 100 Test matches you must make use of that opportunity and JJ has grown, worked a lot on the individual parts of his game.

“I think his goal-kicking was 100 per cent again tonight and as an individual and also in a leadership position, the way that he managed the game. In those conditions, it’s not the kind of place where you can open up, you’ve got to keep it tight and I thought he did excellently.”

Munster’s win in this Conference B summit meeting ensured they topped the tree at Christmas and will rank as one of their most satisfying of the season.

“It’s a massive four points,” admitted Van Graan. “I can’t tell you how tough this block of games is for all teams across Europe . . . 13 games in a row. Connacht has got a few lads out as well but we have 18 guys unavailable tonight due to various reasons. It’s a massive ask for the guys that played against Saracens home and away. Guys like CJ [Stander], Billy [Holland], Jean Kleyn, Chris Farrell that put in 80 minute performances to come out again tonight and perform like that, brilliant.

“In the context of the group we knew if we didn’t win tonight we’d go back to number two. We want to stay on top, we want to win this pool. Such a long way to go, if you think, the playoffs are only in June and we’re just before Christmas now. This was a huge game in the context of the season. All credit to the players.”