James Lowe wins Champions Cup try of the round 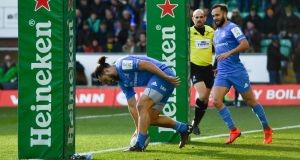 Leinster winger James Lowe has won the best try from round three of the Heineken Champions Cup for his thrilling finish against Northampton Saints last weekend.

The New Zealander scored one of his team’s seven tries in a 43-16 win over the English Premiership leaders at Franklin’s Gardens. Not three minutes were clocked when Jordan Larmour glided outside Northampton openside Jamie Gibson to send Lowe racing clear from 60 metres out for the opening score, finishing off a sweeping team move.

And despite sensational scores from Ulster’s Sean Reidy and Kyle Steyn of the Glasgow Warriors both being popular among the public vote, Channel 4 analyst and three-time tournament winner Jamie Heaslip swung the decision the way of Lowe.

“Jordan Larmour shows the sort of speed that kills and it’s great work by Lowe to stay on his wing and force the Northampton wing to stay out with him,” said Heaslip. “It’s great reaction and vision by multiple players to turn defence inside their 22 when on the back foot into a try.”

Annalise Murphy is runner-up in Melbourne as Round Ireland race takes shape 22:11
Mixed fortunes for Meadow and Maguire on LPGA seasonal bow 20:20
Kellie Harrington guaranteed a medal on her Bulgarian return 19:21
Niall Quinn appointed as FAI’s interim deputy chief executive 17:37
Apple’s Jade to race on as Benie Des Dieux shines at Gowran 17:09
Here is your handy guide to sport on television this week