Munster keen to put brawl against Saracens behind them 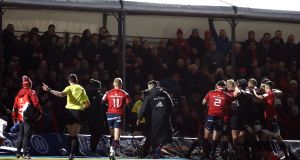 Munster senior coach Stephen Larkham says that the incident which sparked the brawl during their match with Saracens on Saturday has not been discussed by the province and that it is being dealt with by the EPCR.

However, he said they had spoken to staff about their roles on the sideline during matches.

“Everyone knew that anyway, but we reiterated it to everyone as a good lesson for everyone. The 15 players on the field are the 15 players who can take part with anything on the field,” he said.

Munster head of medical Dr Jamie Kearns apologised after the game to England international Jamie George and Saracens coach Mark McCall for a comment he made during the match which sparked the brawl.

The EPCR announced after the Heineken Champions Cup game that they were launching an investigation but Larkham said the matter had not been raised internally.

“We haven’t talked about it at this stage, it’s all been dealt with. We’ve had a couple of good days in training now, we’re very much focused on the weekend.

“Both parties have apologised for what went on and we’re trying to move past it now. We’ve obviously agreed it’s not something that was a great spectacle, but we’re certainly moving on now. Everyone has apologised and we’re moving forward.”

Meanwhile, the extent of the groin injury which forced team captain Peter O’Mahony to withdraw before the march has not been established.

And it’s a similar position with Tadhg Beirne who is poised for surgery after breaking his ankle in the 15-6 loss to Saracens.

“Tadhg, with an operation, is a longer-term injury recovery process. We’re still not sure until we get the report from the surgeon and see how he’s progressed over the last couple of weeks. We can’t make an assessment until then.”

Larkham said Joey Carbery would not be fit to play against Connacht this weekend but that he is not far away from a return from a troublesome ankle injury.

“We’re fingers crossed every week, hoping that he’s right to play. He’s not fully training with us this week, but the good news is that everything has progressed and we will see him on the training park this week.

“Again, it depends how he pulls up from those training sessions before we can assess whether he’s available to play,” added the Australian.

Experts say they have major concerns about Tokyo Olympics in 2021 08:16
Cork GAA club suspends activity as Covid-19 precaution 08:10
Cronin and Powell’s contrasting doping sanctions; Greenwood nets again for United 07:14
Solskjær says Greenwood can ‘go as far as he wants to’ 06:49
Game Changers: The Irish brother who became the Godfather of Kenyan running 06:16
Here is your handy guide to sport on television this week