Greg Feek confirmed as part of All Blacks coaching staff 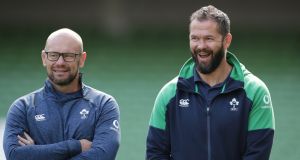 Former All Blacks prop Feek has returned home from almost a decade in Ireland where he was scrum coach for Leinster and then the national side under fellow New Zealander Joe Schmidt.

“Greg has been involved in more than 100 Tests with Ireland and helped coach a successful Irish pack,” Foster said.

“For a young coach, he brings vast international experience. He’s got a great ‘tactical-technical’ sense and also a great way of communicating at the right level.”

Plumtree was an Ireland assistant coach in 2013-2014 and joins Foster’s coaching ticket from the Wellington Hurricanes, where he will be replaced by former Munster player Jason Holland. Former All Blacks winger Cory Jane will join the side as defence coach, the Super Rugby team said.

Scott McLeod, who worked alongside Foster as an assistant to former All Blacks head coach Steve Hansen, will continue as defence coach, a job he has held for the last two years.

“I’m delighted to confirm three of the four other coaches who’ll make up our coaching team,” Foster said in a statement.

“They’re all outstanding coaches in their own right, and we’ll have new voices and fresh ideas in the All Blacks.”

NZR said one more coach was expected to be added to Foster’s group, with Brad Mooar widely tipped by New Zealand and British media to cut short his contract with Welsh club Scarlets and return home.

Plumtree’s move from the Hurricanes had been widely expected and the team’s chief executive Avan Lee said they would likely promote from within if Foster was appointed as All Blacks coach and took Plumtree with him.

“We are delighted that Jason Holland will be our new head coach,” Lee said on Thursday. “I know he will continue to strive for success and produce the exciting brand of rugby our loyal fans enjoy.”

Former All Blacks flyhalf Grant Fox is to continue as a selector in 2020 despite having said he was likely to step down.

All the coaching group have been given two-year contracts.