Impressive Leinster firing on all cylinders 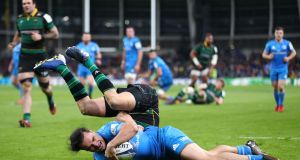 Leinster’s James Lowe scores a try despite the challenge from Dan Biggar of Northampton Saints during the Heineken Champions Cup clash at the Aviva Stadium. Photograph: Michael Steele/Getty Images

Leinster’s facile victory permitted them to accelerate into the Heineken Champions Cup quarter-finals after just four rounds of the pool stages but, while a notable milestone, it won’t materially affect their outlook when Europe resumes in January. The concern then will be to secure a top seeding and a home draw to facilitate an ambition to make it to Marseille.

Before then they’ll indulge in a little sibling rivalry with Pro14 fixtures against Ulster, Munster and Connacht over Christmas and the New Year. Leo Cullen has previously stated that Leinster’s Irish World Cup squad contingent will get time off during that period as he rotates the playing roster presumably in a staggered manner.

On the evidence of the recent victory over Glasgow and the way in which some of the younger players have seamlessly stepped up to European benchmarking, Cullen and his coaching cadre will be optimistic the province can maintain the momentum of an unbeaten season to date.

Northampton head coach Chris Boyd made eight changes from the side pummelled by Leinster in Franklin’s Gardens. The visitors were quickly disabused of any notions of a different outcome, their fate effectively sealed in a lacklustre opening 21 minutes in which they conceded 24 points, a tally that might have been appreciably higher had Leinster been a little more clinical.

Garry Ringrose’s first in a hat-trick of tries was down to his speed off the mark in blocking Andy Symons kick and the presence of mind to retrieve the ball quickly; his second a training ground sketch brought to life by the sharp hands and minds of Josh van der Flier, Luke McGrath, Ross Byrne, Robbie Henshaw (subtle block on Dan Biggar) and James Lowe. The third try, in the second half, was more prosaic, based on predatory instincts as he swooped onto a loose ball near the Saints’ line.

Tadhg Furlong, back to his rumbustious best, trundled over as the Leinster pack flexed their muscles, an apt description of Rhys Ruddock’s rip and strip tackle that preceded Dave Kearney’s bonus point try; Ringrose on this occasion the architect.

Leinster led 31-14 at the break and the only thing left to debate was the final margin of victory. James Lowe made the most of Ross Byrne’s delightfully weighted grubber kick to touch down and he was followed over the Northampton line by Ringrose and number eight Caelan Doris during the second half in which the 42,000 supporters were enthralled by the twinkle-toed Jordan Larmour.

The Leinster fullback treats opposing defences like a Giant Slalom course as he scoots this way and that in search of a clearing: 124 metres, 12 defenders beaten, three clean breaks and the man-of-the-match accolade. Doris wouldn’t have been far behind in those considerations; he was outstanding in arguably his best performance for the province.

Ringrose, Ross Byrne and van der Flier also made compelling cases but in truth everyone from Cian Healy, and his footwork and power in contact to Robbie Henshaw, and his brilliant cover tackle on Lewis Ludlum, enjoyed some individual highlights in a team capably led by the consistently excellent Scott Fardy.

There will be tougher days, pressure wise, for Ross Byrne but his game management, distribution and kicking were excellent, while European debutant, Ciaran Frawley’s 33-minute cameo was characterised by an impressive maturity and some natty soccer skills. Hooker James Tracy’s work-rate was top class while Bryan Byrne will have appreciated the run out.

There were blemishes too, Leinster’s defending, at times, brittle and passive; the backs missed 15 tackles between them with Luke McGrath an honourable exception.

Northampton didn’t have to work particularly hard as a rule for their tries, scored by Dan Biggar, a wonderfully feisty pantomime villain, Ollie Sleightholme and Ahsee Tuala. It did not matter on the day but Leinster’s coaching team will not want similar slackness seep into other performances.

There were also glitches in attack, Leinster spurning several gilt-edged try scoring chances due to their being a little imprecise, impatient and occasionally careless. Tighter games will require a sharper focus. Discipline is another area in need of improvement. The home side conceded 12 penalties, the type of figure that can ordinarily derail a team.

None of these issues will have impinged massively upon the general enjoyment in the stands as there was plenty to admire from individual artistry to collective cohesion. The bench when summoned added some impetus and in a couple of cases got valuable match minutes.

The fact that there were no further injuries other than Ross Byrne’s dead leg, will offer Cullen a free hand when it come to team selection for the Pro14 game against Ulster at the RDS on Friday night.

Leinster, in the midst of a 13-game block, are exactly where they want to be in both the Pro14 and the Champions Cup. The priority will be to ensure that the festive cheer endures well in to January and beyond.