Make-or-break for Connacht as they meet Gloucester 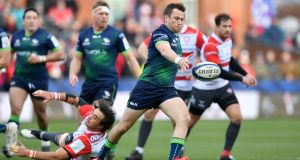 There is no room for error when Connacht host Gloucester in the return back-to-back Champions Cup fixture at the Galway Sportsground on Saturday.

Connacht’s 26-17 loss to the English Premiership outfit last weekend means they are now positioned at the bottom of Pool 5 after three rounds, with little hopes of progressing unless they produce a first ever win over Gloucester.

And with the visit of Toulouse and a trip to Montpellier to follow, Andy Friend’s side is the one under pressure going into today’s match. They know anything other than a bonus point win is unlikely to be good enough to preserve their hopes of qualification for the quarter-finals.

“This game is important because it is at home, and after the last couple of performances we know we can be better. Thirdly, we need to win to stay alive, so it is a massively important game for us,” says Andy Friend.

The Connacht coach is banking on a festive crowd to swell the Sportsground in his side’s bid to upset the odds.

“We are expecting a big crowd at the Sportsground, and we know how difficult it can be to beat us, especially when we are at home.”

To this end Friend has made a number of changes to his starting XV, most notably the selection of Jack Carty at fullback, with in-form youngster Conor Fitzgerald continuing in the pivotal number 10 jersey.

It is an unfamiliar position for the Ireland outhalf, but Friend sees it as a good option to accommodate the in-form Fitzgerald, while fullbacks Tiernan O’Halloran and Matt Healy are still sidelined. It means a return for last week’s try scorer and fullback John Porch to the wing, giving more kicking options for Connacht with Carty at 15.

As a result, Kyle Godwin returns to the centre to partner Bundee Aki, while Caolin Blade, in the continued absence of the injured Kieran Marmion, continues his developing halfback relationship with youngster Fitzgerald.

There are two changes to the back row. Joining captain Jarrad Butler for his 50th cap, are Paul Boyle at number eight and the experienced Eoin McKeon, back from injury.

Ultan Dillane will take over direction of the lineouts with Quinn Roux rested, similarly Friend has opted to change the entire front row with hooker Dave Heffernan, named alongside temporary addition Peter McCabe, and Dominic Robertson-McCoy.

It will be a tough challenge for the front five against Gloucester, who have brought in last week’s replacements up front, with the influential Ruan Ackermann moving to number eight.

In the backs there is no Danny Cipriani or last weekend’s double try scorer Tom Marshall, in the starting line-up, but Lous Rees-Zammit , big centre Mark Atkinson and Ollie Thorley will provide the threat out wide.

However, coach Yohan Ackermann is taking no chances, having named the likes of World Cup winner Franco Mostert, Cipriani and Joe Simpson on the bench.

Disappointed with last week’s performance, Friend is expecting a much improved display of clinical efficiency from Connacht in their bid to turn the tide.

Godwin’s return to centre, coupled with a first start for Carty at fullback indicates a kicking game in a bid to establish territory.

Expect Connacht to produce a much-improved display over the West Country side today. It could be enough to win,but getting a bonus point will be a lot more difficult with the stakes so high for both sides.