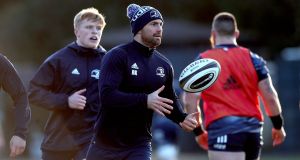 Rob Kearney: experienced Ireland international will man the fullback berth for Leinster against Ulster at the RDS. Photograph: Ryan Byrne/Inpho

The door has not closed on Irish fullback Rob Kearney’s international career. The 33-year-old, who was omitted by Andy Farrell from his first 45-man Irish squad after 13 years as an Ireland team player, still has something to offer with Leo Cullen picking the veteran to start against Ulster in the RDS this weekend.

Cullen cited Devin Toner, who is also 33-years-old, as the player with the perfect reaction to being left out of Joe Schmidt’s World Cup squad. The secondrow has bounced back on the pitch after the disappointment and is again in the Irish fold looking towards the Six Nations Championship.

“He made his debut in 2006, that’s 13 years with Ireland so of course you’re surprised,” said Cullen of Kearney’s omission. “I chatted with Rob at the start of the week and used Devin Toner as an example with him.

“He [Toner] has been exceptional since he came back after missing out on the World Cup squad. He’s gone really well and that is what Rob must focus on now, getting the head down and training well with us and he has to be fair. I don’t see it as a door closing.”

The former British and Irish Lion is resting on 95 caps and agonisingly close to the 100-plus cap club occupied by just Brian O’Driscoll (133), Ronan O’Gara (128), Rory Best (124), Paul O’Connell (108) and John Hayes (105). Cian Healy, also on 95 caps, is another who could reach three figures if he plays in the five Six Nations Championship games next year.

“He [Kearney] is disappointed obviously but now he needs to get his head around what is next for him,” added Cullen.

“What can he control? He can’t control selection for Ireland. But he can control how he plays and he’s lucky in a way that he has got a chance straight away to go out and showcase what he can do.

“I get the feeling they are going to pick the best in the Six Nations in terms of who is going well in form. Places are there to be won on their own merit, I gather. I get that from reading in between the lines. They want to look at some other players. Others who were at the World Cup have missed out from the other provinces as well. It’s all about spreading the net a little wider I guess and it’s something we are always keen to do here at Leinster too as much as possible.”

The in-form back Jordan Larmour has now ownership of the shirt as Farrell possibly looks towards a new era after the natural World Cup cycle. Both a wing and fullback, who has at times featured in the centre, Larmour’s talent with greater maturity has brought mounting pressure.

“Jordan has kicked on in the last couple of weeks obviously,” said Cullen. “But Rob has got his chance this week and he will hope to take it.”

Maguire holds steady as Munoz leads in Scotland 17:08
Lewis Hamilton claims pole position in Barcelona 15:42
Dublin SFC match called off due to positive Covid-19 test 15:34
Mikel Arteta given more control at Arsenal as Raul Sanllehi leaves 14:17
As ever, Ronnie O’Sullivan sparks debate at the Crucible 15:37
Here is your handy guide to sport on television this week