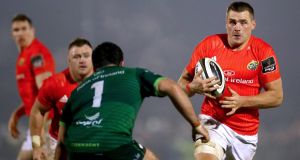 Munster’s CJ Stander on the ball against Connacht at the Sportsground, Galway. Photograph:James Crombie/Inpho

Some provincial rugby supporters may again feel a little shortchanged due to so many frontline players – pretty much all those who went to the World Cup – being absent for two weeks and thus also for two of the derbies which have become enshrined in the festive season.

However, given the expanded World Cup squad began pre-season in mid-June and for many of them the season won’t conclude until the end of the Australian tour in mid-July, something had to give.

When you think about it there’s also no better time than in and around these three rounds of Pro14 derbies, what with the final two rounds of the Heineken Champions Cup to follow and then, barely pausing for breath, the 2020 Six Nations.

Arguably no player in the country is more deserving of a break than CJ Stander. Made captain for the night, as usual no one did more for his team than the Irish No 8. Nobody made more carries (17) or more tackles (14) in Munster’s cause than the indefatigable Stander, for whom this was a standard performance so to speak.

Yet not even Stander is indestructible.

Word was already out there that he would be going back to the family farm in the Western Cape and temperatures in the mid-20s with his wife Jean-Marie and their five-month-old baby girl Everli.

Even so, when asked if he was getting a break he felt compelled to turn to Johann van Graan, whose smile and nod of approval, permitted Stander to confirm as much.

“Yes, I’ve got a two-week break, so I’m looking forward to that, spending some time with my little one and my wife.”

Even amid Ireland’s disappointing World Cup, Stander kept showing up for work, and he was an ever-present, playing in all five games bar the first 26 minutes against Russia.

It has been for me really exciting to be captain of them and train with them as a team. They gave me energy this week and they picked all of us up

And so he has, literally, carried on in the same vein for Munster, and he is the leading ball-carrier in the Champions Cup this season. But even he must be wrecked?

“I’ve learned over the years that you can’t just pitch up every week and expect your body to go. I think mentally it’s good to get a break.

“Look, in this squad with Johann as well, if he asks you to do a job you know you’re going to be looked after at some stage. If everyone plays well around you it’s nice to just jump in and take that charge. I’m delighted to get a bit of a break now. Looking forward to my break.”

Stander had assumed the captaincy at late notice in the defeat at Allianz Park by Saracens after Peter O’Mahony had pulled up in the warm-up. This time he had all week to lead a comparatively inexperienced team.

“Yeah, it was an interesting week. We had a few things going on, but the squad we have with the younger guys, the academy and the team...so we got a team that always trains and plays, and the boys are there to push us on and they got a chance to play this week.

“It has been for me really exciting to be captain of them and train with them as a team. They gave me energy this week and they picked all of us up. They have really pushed the envelope. It has been a great week. I really enjoyed this week.

“We had a nice captain’s run yesterday when we came down here. We had a great game. Again, leaders standing up in the group. Younger guys – that’s what we need, it’s good for the future.”

Nonetheless one sensed the inquest into Munster’s decision to go to the corner rather than kick the penalty which would have earned them a bonus point against Saracens had been difficult for him and other leaders in the team.

We are very confident that we have the makings of a very good team, but wins don’t come by pure chance for us

“Yeah, I’d probably just take my time next time,” Stander admitted if he was placed in the same situation. “In hindsight you can always do something different. I took the opportunity and it didn’t work out. That’s life, that’s it. Now I know and I tried to change it tonight, and I think it worked out.”

Indeed, on Saturday they took their three-pointers whenever they were on offer, leading from pillar to post as they kept Connacht at arm’s length.

Ultan Dillane expressed the mood in the home dressingroom. “It was bitterly disappointing for us, unfortunately. I think to sum up we were blunt with our attack when we got opportunities, and when we did we had a way of constantly relieving pressure and that kept Munster with their tails up and a bit of confidence that they could control the lead.”

Asked whether the late comeback against Gloucester had glossed over the mistake-ridden performance and that maybe Connacht weren’t firing as they might just now, Dillane said: “I mean there could easily be an argument for that.

“Yeah, we’re going to have to look at how we’re training and try to go back to the drawing board because we are very confident that we have the makings of a very good team, but wins don’t come by pure chance for us. We have a good thing building, but we just need to be able to deliver when it counts.”

Despite the psychological blow of losing a targeted derby game at home in front of a capacity crowd, Dillane said Connacht would be “as confident as usual” for next Friday’s trek to the Kingspan Stadium, where they recorded a first win over Ulster in Belfast since 1960 last season, before being beaten there in the quarter-final play-off.

“It’s a tough game but derby matches are huge and everyone loves to play in them. It’s as big for the players as it is for the fans.

“We’d love to be that team that upsets their fortress next week. We’re going to try and enjoy our Christmas, but hopefully we’re going to give them a good game next week as well.”