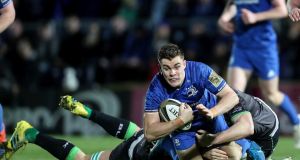 Leinster’s Garry Ringrose is tackled by Robin Copeland of Connacht during their Pro 14 match at the RDS. Photograph: Laszlo Geczo/Inpho

Not four years ago these teams faced off in a Pro 12 final at Murrayfield. Connacht deservedly and joyously prevailed. On this evidence the gulf in quality between the eastern and western provinces has never been wider.

There are obvious reasons for that.

“We want to deliver for all the people that turn up to watch us play,” said Connacht coach Andy Friend. “The least that they deserve from us is that every player that plays delivers 80 minutes of intensity or the guys off the bench give 10 or 20 minutes of intensity. That is the minimum standard we demand.”

That minimum standard was blatantly not attained on Saturday night. It does not help that Friend has been working off 26 fit players through December. The injury count was 17 before kick-off and 20 for the quiet journey home.

All the statistics are damning. Max Deegan began his best ever showing in a Leinster jersey with the opening try before the clock struck two minutes. The bonus point was secured inside 20 minutes by the number eight’s deft pass to big Joe Tomane.

“Not good enough,” said Friend of the defensive effort. “We soaked. But you must compliment Leinster. One to 15 they’re really strong guys who run hard at space and ask questions, and we didn’t answer them well enough. It wasn’t until Dom Roberston McCoy put a big shot on Sean Cronin that we stopped soaking. And if you soak, you leak points and that’s what happened.”

If Leinster had been so inclined their 40-0 half-time lead could have broken the century. Connacht were inexcusably weak in collisions, missing 31 tackles in total.

“Max showed his versatility, which is the big thing,” said Leinster coach Leo Cullen of Deegan. “First half he plays at number eight and second half he plays number seven. That’s not an easy skill to do. He is a very good footballer, and he is excellent at slotting across the back row.”

Such versatility can work against a player. Caelan Doris is the specialist number eight, as he continued to prove when replacing Will Connors, a specialist openside, who was cautiously withdrawn at the interval following a head injury assessment, which he passed.

Deegan is expected to be benched when Lyon visit the RDS on Sunday as Doris, Josh van der Flier and the powerful Rhys Ruddock – outstanding yet again on the blindside – offer Ireland coach Andy Farrell a potential international back-row trio for the Six Nations.

“Sometimes when you ask those back-row players to do that it can compromise them slightly, so he understands that that is sometimes a role that he needs to do for the team and, credit to him, he goes about his business and preps well,” Cullen added.

Deegan did not compromise himself one bit, claiming two tries and delivering a hat-trick of assists.

All this unfolded with James Ryan icing his calf after being replaced on 23 minutes – just after the bonus point was secured. Yet Ryan Baird – a more athletic if lighter version of Ryan (yes, St Michael’s have produced another one) – made an immediate and sustained impact with 14 carries and just the 20 tackles in 57 minutes.

Deegan’s first try was created by the Connacht lineout when Denis Buckley mishandled hooker Shane Delahunt’s low throw. Ryan grabbed possession to allow Offaly prop Peter Dooley to power through the shoulder of Eoghan Masterson, before offloading for his number eight to twist over.

Paul Boyle, a former Leinster back-row, was next to miss a front-up tackle, as Deegan stormed through midfield and sent Frawley clear.

As Frawley’s conversion – he only missed one – of Tomane’s try split the uprights, Prof John Ryan was treating Ryan’s injury. Yet a quick restart by Conor Fitzgerald saw the lock leap back into the action, making two tackles in the next three minutes, before the medic demanded his removal.

The second half was a more sluggish affair, albeit with the same narrative until 70 minutes when the Connacht lineout maul drove Tom McCartney under the blue wall.

By then many of the satisfied 18,300 capacity crowd had sought shelter from the cold.