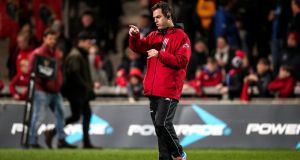 Munster head coach Johann van Graan was disappointed with how his team started in their Pro14 loss to Leinster. Photo: Billy Stickland/Inpho

Munster coach Johann van Graan admitted to a feeling of “disappointment” in the wake of his side’s 13-6 defeat to Leinster, their first defeat in 22 matches in all competitions at Thomond Park. He highlighted a slow start as an important factor, allowing Leinster to settle and giving them some field position through penalties which they were able to maximise a return in points’ terms.

He explained: “Obviously very disappointed to lose at home. It was an incredibly tough match. I thought we didn’t start the game well enough. They put us under pressure, we conceded penalties and they kicked us into the corner.

“Ultimately, their try was the difference in the game. I thought we reassessed quite well at halftime and adapted. We had multiple opportunities in the 22. All credit to Leinster, they kept us out. In the last 10 minutes, we just literally couldn’t get over the try line.”

He praised Leinster’s gritty resilience in defence. “It’s a quality side and that’s why they’re the champions I guess. I thought they handled the big moments better. We were in it until the last play of the game and unfortunately, we lost a lineout there on the goal-line; very frustrating but well done to them.

“The second half, obviously, we won 3-0 but the fact that we were 13-3 down at halftime, right at the end it cost us. I’ll have to go and have a look at the game, obviously, (to see if) they were onside for every single phase there at the end and they got rewarded with that penalty. And as I said, we lost a crucial lineout.”

Leinster head coach Leo Cullen was delighted to get the win but conceded that the strong wind had a significant influence on the game. “To get a win down here is fantastic. A lot of young guys out there, they dig in at the end, that’s the most pleasing piece. Wave after wave it’s pick and go close quarter stuff, but at least we were getting bodies in the way to stop the ball-carrier with latches and all the other bits.

“It was a funny game. The wind, it was almost like having two extra defenders with the wind. So defence was on top for most of the game. It was hard breaking both defences down, ultimately. Lots of endeavour from both sets of players, but probably lacked a bit of cutting edge quality from both teams.”