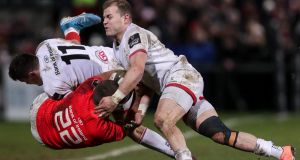 Munster’s Dan Goggin is tackled by Jacob Stockdale and Will Addison of Ulster during the Guinness Pro 14 game at the Kingspan stadium in Belfast. Photograph: Laszlo Geczo/Inpho

It had been billed as a potentially mouth-watering contest with plenty to whet the appetite in terms of head-to-heads but it turned into anything but as in-form Ulster upped the ante to put visitors Munster to the sword at the Kingspan stadium.

John Cooney completely eclipsed Conor Murray and ended his evening scoring 18 points from a try, a penalty and five conversions as Ulster racked up another bonus-point win to close the gap on Leinster to six points at the top of Conference A of the Pro14.

Cooney wasn’t alone as Ulster put the squeeze on Johann van Graan’s side despite having some early set-piece issues.

Robert Baloucoune, Matty Rea, Stuart McCloskey and Jacob Stockdale also crossed the Munster line, with the latter scoring his first try for the province in nearly a year.

As for Munster, they opened and closed the game with tries from Shane Daly and Niall Scannell, but there was precious little substance to this performance which saw Chris Cloete yellow-carded for a tip tackle.

In fairness Joey Carbery ran a few nice lines but even with Peter O’Mahony and Keith Earls on board, Munster looked toothless and not really up for the fight despite trailing 17-10 at the break.

After a nervy enough start for both sides, the visitors then exploited some space on the short side off a scrum which saw Murray and Carbery combine to send Daly through a gap between McCloskey and Baloucoune.

Rea was also unable to stop the fullback from rolling over and the score was awarded after referee Dan Jones consulted with his assistant. Carbery converted and Munster were 7-0 to the good.

Ulster then cut the lead after Keynan Knox was jackaled by Marty Moore and Cooney slotted the 14th-minute penalty.

They then worked some space on the edge from a scrum, an area the home side looked less than comfortable with, and when Stockdale made ground he drew the scrambling Munster defence to supply Cooney, who easily stepped Earls to score before adding the conversion.

Another score looked on the cards with Munster’s defence again stressed out wide only for Will Addison to drop the ball with Stockdale lurking dangerously.

Just before the half hour, Ulster put a penalty into the corner and trusted a lineout which had been having issues to deliver. It did so but Munster sacked the maul and after Billy Burns’s cross-kick to Baloucoune was ushered dead by Daly, Ulster went for a scrum.

Another infringement followed with Rory Scannell taking out Cooney and Murray potentially deliberately knocking on, but no cards were shown and Ulster opted for another scrum.

The inevitable finally happened after a charge from Iain Henderson up to the line and, with yet another penalty pending, Ulster moved the ball with Luke Marshall sending Baloucoune in for the try which Cooney converted.

Then with the last play of the half, McCloskey was pinged for not rolling away and Carbery did the needful, cutting Ulster’s lead to seven points.

If Munster had felt reasonably good about themselves having scored just before the break they were immediately on the back-foot on the resumption and after Rea had won a lineout he popped up on the end of a pass to easily race through and dot down. Cooney converted and Ulster had three tries and now led 22-10.

The bonus point was inevitable and arrived in the 57th minute. After Dan Goggin was enveloped by Nick Timoney and Stockdale, Ulster won the penalty and put the ball in the corner.

With pods of forwards hammering at the Munster line and another penalty pending, McCloskey barged over near the sticks. Cooney once again converted.

Stockdale then ran in an intercept just after the hour for his first try in nearly a year, Cooney again adding the extras.

Niall Scannell got over from a 64th-minute maul which Carbery converted off the post but that was as good as it got with Cloete being sin-binned with seven minutes left for a tip tackle on McCloskey.