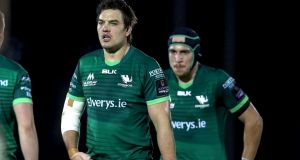 Connacht’s Quinn Roux: underwent surgery for a hand injury, and is not expected to return to training until February. Photograph: Bryan Keane/Inpho

Quinn Roux’s hopes of returning to the Irish side for the start of the Six Nations have been dashed, with the 29-year old having to undergo surgery for a hand injury.

The lock forward, who won the last of his 12 caps against Wales last March, had genuine aspirations of making it to the World Cup having also played against Italy, Scotland and England in the Six Nations, but didn’t make the cut.

Connacht coach Andy Friend said the manner in which Roux channelled his disappointment into big displays for the province was an example for all to follow, and he was thrilled when the South African was called into Andy Farrell’s first Irish get-together.

However, Roux suffered a hand injury on his 100th appearance for Connacht against Munster before Christmas, and surgery has been required, ruling him out of a return to training until February.

That’s a revolving door, it just keeps going. We lose one in Quinn but we gain one in Gavin [Thornbury]

Friend said it is a disappointing blow for the player and also for a Connacht squad crippled by injuries preparing for a daunting trip to the RDS to play Leinster on Saturday, and facing into Heineken Champions Cup clashes against Toulouse and Montpellier with their qualification hopes hanging by a thread.

There is a boost for Connacht, with lock Gavin Thornbury returning just as Roux faces a spell on the sideline.

“That’s a revolving door, it just keeps going. We lose one in Quinn but we gain one in Gavin. But credit to Gavin on his return to play quicker than we expected,” said Friend.

“We had that with Tiernan O’Halloran and with Paddy McAllister too. Credit to those men and to our medical staff. They’re under such pressure and our athletic performance staff to churn these blokes back out.”

Having Thornbury back in contention is a timely boost for Connacht, who only had 22 senior players training this week due to injury, illness and player management. The former Leinster academy player will likely go straight into the squad to face his former side at the weekend, where his lineout skills will be a major asset.

Despite spending two months on the sick list due to a dislocated elbow, the 26-year-old still tops the league’s lineout steals chart, with five from his four games played. Friend thinks his talents will be important at a venue where Connacht have never won.

“Gavin is brilliant, he has been brilliant. You can forget that, but when Gav dislocated his elbow Joe Maksymiw came in and he started stealing lineouts. He stole three brilliant lineouts against Munster and the other night again against Ulster.

“Ultan Dillane and Quinn Roux have been doing it too. That lineout defence is putting a lot of pressure on the opposition at the moment and it’s not easy ball to win if you’re an opposition against Connacht.

“This is a huge test. Leinster have been phenomenal this year, and it doesn’t seem to matter which 23 is wearing the jerseys – they are still pretty damn good. I don’t believe we’ve beaten them at the RDS before so this is a great challenge for us.

“Ideally it would be brilliant, it’d be a great way to start the new year if we can take a blue scalp up there on Saturday.”