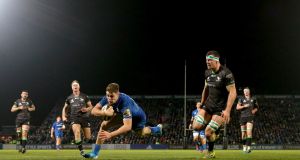 James Ryan damaged his calf - and possibly exacerbated it with two tackles in three minutes after Professor John Ryan’s on-pitch prognosis deemed his race was run - as Leinster banked the bonus point, faced by inexcusably weak Connacht defending, inside 20 minutes of this Pro 14 interprovincial derby.

Be under no illusion, this was more of a Pro 14 than derby affair.

This latest Christmas period proved that the days when interpro battles mattered in an international context - especially after a Rugby World Cup - have long since passed.

The killer tries - four in four visits to the westerner’s 22 - are worth a paragraph apiece, but Ryan’s calf could alter the preparation of Andy Farrell’s Ireland with Scotland coming to Dublin on February 1st. The good news is that Ryan Baird - a more athletic if slighter version of Ryan (yes, St Michael’s have produced another one) - made an immediate impact with three forceful carries.

“He thinks he got a kick in the back of the calf, little bit sore, there’s an ice pack on the calf so we will get him assessed,” said Leinster coach Leo Cullen.

Leinster did not miss a beat with fifth and sixth tries registered before the interval by Luke McGrath and Max Deegan (his second). The 40-0 scoreboard suggested Connacht men sat under the old Anglesea stand staring down the barrel of a record and humiliating defeat. It also guaranteed a clean sweep of losses to the neighbours over the festive period.

Deegan’s first try was on the board inside two minutes. It was created by the Connacht lineout when hooker Shane Delahunt’s sloppy throw was picked off by Ryan, allowing Offaly prop Peter Dooley to power through the shoulder of Eoghan Masterson before offloading for his number eight to twist over.

The second score came when Ciarán Frawley identified acres of space, duly switching the point of attack as Dave Kearney controlled Garry Ringrose’s over throw to scramble across the white wash.

Paul Boyle - a former Leinster backrow - was next to miss a front up tackle, as Deegan stormed through midfield and sent Frawley clear.

As Frawley’s conversion - he only missed one - split the uprights Prof Ryan was treating Ryan but a quick restart by Conor Fitzgerald saw the lock leap back into the action.

Ideally his bravery didn’t cause any more damage.

The second half was a more sluggish affair albeit with the same narrative. Deegan’s superb performance continued when fending and powering past two more poorly attempted tackles to offload for a dashing Ringrose.

Thereafter Leinster pretty much entered a 20 minute defensive session with man of the match Rhys Ruddock ripping ball from Connacht hands, like candy from a baby, when the visitors thought they had earned a consolation try.

The paltry return of seven points did eventually come on 70 minutes when the lineout mail drove Tom McCartney under the blue wall.

“[CONOR] thought he heard a crack on his ankle,” said Connacht coach Andy Friend, “and his brother [STEPHEN]did his knee so it is not a good day for the Fitzgeralds. It didn’t look good either.”

The Leinster attitude need hardly change in the coming week - although the personnel will - while Connacht must rediscover the steely, and what can also be described as sporadic, mindset that saw them topple Montpellier last November in Galway.