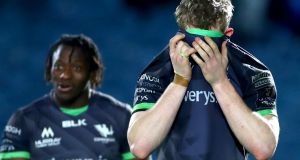 As Leinster and Ulster aim to secure home advantage in the Heineken Champions Cup quarter-finals, Munster and particularly Connacht limp into European battles against the cream of French club rugby.

Injury lists are lengthening ahead of the last rounds of pool matches, over the next two weekends, with Leinster managing by using 50 players while Ulster are coping but the Munster and Connacht squads appear close to breaking point.

“Day by day he’s working away,” is Leo Cullen’s latest update on Johnny Sexton following a second visit to a knee specialist in England last week. “He’s training away in the gym with the rehab guys and we’ll do everything we can to get him back as soon as possible.”

The World Cup was always going to exact a heavy toll on Irish bodies with Leinster awaiting an update on James Ryan’s calf injury, while Munster lost Andrew Conway and Niall Scannell during Friday’s worrying 38-17 defeat to Ulster in Belfast.

Johann van Graan, the young Munster coach, is struggling to avoid blaming the lack of accessibility to 12 internationals after a miserable two wins from seven outings. Jean Kleyn, CJ Stander, Mike Haley and Chris Farrell will return for what looks like a win or bust game against Racing 92 in Paris next Sunday evening.

“We want to win every single game but literally we haven’t had any continuity,” said van Graan.

Players returning from Japan were granted a fortnight break last month in the middle of a 13-game block in what has become a tortuous 13-month season. At least outhalf Joey Carbery is back in harness following his injury-cursed 2019.

Ulster’s lack of international representation reduces their exposure to the World Cup fallout with backrowers Marcell Coetzee and Jordi Murphy expected to return for a daunting trip to Clermont Auvergne, where a bonus-point defeat would set Dan McFarland’s men up to top pool three if they win their round six fixture against Bath – who cannot progress – on Saturday week at the Kingspan Stadium.

Ulster are hopeful John Cooney – the form player in European rugby, which he re-emphasised with an excellent try and kicking display to see off Munster – comes through the return-to-play protocols.

What’s also hugely pleasing for Ulster and Irish rugby was the sight of Jacob Stockdale scoring and creating tries again. The winger ended a drought in Belfast that almost stretched a full year with a brilliant individual effort when stripping Dan Goggin of possession and sprinting clear.

Connacht’s current situation is nothing but grim as head coach Andy Friend attempts to repair a tattered squad to make a run for the Pro14 play-offs. Friend, while refusing to wave the white flag over Europe, indicated as much when the injury count tipped 20 bodies following Saturday’s sobering 54-7 defeat to Leinster at the RDS.

It was 40-0 at half-time and by the end both Fitzgerald brothers, Stephen (knee) and Conor (ankle), were staring into long-term periods of rehabilitation.

“[Conor] thought he heard a crack on his ankle,” said Friend, “and his brother [Stephen] did his knee so it is not a good day for the Fitzgeralds. It didn’t look good either.”

Bundee Aki, Ultan Dillane and the out of sorts Jack Carty are available but the back-to-back Champions Cup ties against Toulouse and away to Montpellier can no longer be the priority for a management that needs to salvage something from a season in rapid decline.

“No, I’m not [worried] because we have a lot of fight and character in the group,” said Friend when asked if the “wheels are falling off” after three straight interpro defeats. “And we do have some bodies coming in.”

What’s certain is the injury crisis will not be alleviated by extra players being added to the Connacht roster from other Irish provinces.

“We have got Pete McCabe in who has been with us previously but shy of that it has been a bit tricky,” Friend explained. “It is hard getting players [mid-season on loan] and that is why we have delved into our academy.”

Connacht desperately needs the respite offered by the Six Nations with no Pro14 matches until February 15th. Friend stated the next run of league games against Cardiff at home, Edinburgh away and the long-haul trip to the Southern Kings will define their season.

“It definitely does,” he replied when asked if the Pro14 must now be prioritised over the Champions Cup. “We’ve been working with 26 players for the last three or four weeks and it is about churning them out and using them the best we can and getting a performance that we can. But every contest we enter we firmly believe we can win it and the majority of the squad firmly believe that but, you are dead right, at some stage we have to pin our colours to the mast and say we need to focus on the Pro14.

“But at the same time you want to make sure you don’t keep getting licked because then all confidence goes.

“It’s a real fine line. You don’t come into this job if you’re not a competitor but there comes a time though when the reality hits and you have to look after a few players.”