2023 Rugby World Cup: What will the Ireland team look like? 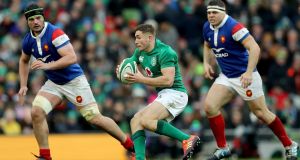 Jordan Larmour of Ireland during a Six Nations match against France at the Aviva Stadium in Dublin last year. Photograph: David Rogers/Getty Images

Nobody remotely affiliated with Irish rugby wants to meditate over another four-year cycle. But, mustering as much gusto as possible in early January 2020, we can try to imagine the Ireland team at the next World Cup.

The first name is easy – Jordan Larmour at 15 – but history tells us a majority of the players Andy Farrell selects for the fast approaching Six Nations will feature at France 2023.

There are enormously difficult decisions to be made at halfback, or not. In any case, Larmour, Garry Ringrose, Jacob Stockdale, Andrew Porter, Joey Carbery and James Ryan are about to enter their prime years. CJ Stander is 29 but there is no evidence to suggest his astonishing numbers either side of the ball will fade any time soon. The same sentiment applies to Tadhg Furlong, who turned 27 last November, and Josh van der Flier (26).

What seems obvious is the attack must be shaped around Ringrose and Larmour. Mike Catt, Ireland’s new backs coach, knows this better than anyone. Since Larmour returned from Japan everyone can see this once-in-a-generation talent must be on the field when it matters most.

History also indicates the same misfortunes will be visited upon Ireland when the World Cup rolls around again.

An example is the dream backrow of Seán O’Brien, Dan Leavy and Stander – with Peter O’Mahony or even Jack Conan in reserve – being denied time together by cruel yet inevitable injuries to three of the five players.

History keeps telling us the often mentioned “learnings” will not register quick enough to match rugby nations like Wales and South Africa, who possess the “emotional quotient” and strength in depth to peak every four years.

It is not all bad news. Nowadays, the provincial squads boast quality in every position, with a Leinster-reared solution to most problems.

And yet, Ireland always comes up short in one or two areas when they enter the global arena. An obvious example was Rory Best battling on for another four years despite accumulating 89 caps by the age of 33 in 2015.

That he was still the best hooker in 2019 is an indictment of the system, not of the since retired captain.

That the Leinster private schools remain the cure for all that ails Irish rugby is another long-term issue, but Rónan Kelleher and Dan Sheehan can combine to fill the national hooker slots in due course. From the St Michael’s and Clongowes rugby nurseries, Kelleher already looks the part, while Sheehan possesses the physical attributes of a modern number two.

This sounds promising, but the recruitment of Rob Herring (a South African in Ulster) and Tom McCartney (a New Zealander in Connacht) shows the IRFU decision makers were keenly aware of a dearth in hookers.

Neither has worked out internationally.

Naturalised foreigners will dry up in the coming seasons due to the extension of residency laws from three to five years but, ideally, Kenyon Knox – a humongous 21-year-old South African tighthead who started for Munster last night – and James Lowe can match the contributions made by Bundee Aki and Stander.

That’s a tall order, because the durability of Aki and Stander will stand the test of time, especially if both stay with Ireland for a second World Cup.

Either way, unearthing strong men from abroad is all but over unless the recruitment of teenagers, like Knox or Roman Salanoa from Hawaii, straight out of high school becomes a widespread policy.

Not that this needs to be cause for concern, because the flow of talent from Leinster, like Tommy O’Brien and Ryan Baird, and to a lesser extent Munster – Jack O’Sullivan being the coming force – is encouraging.

Craig Casey and Scott Penny are special players, but scrumhalf and openside – their positions – are better stocked than ever before.

The number nine jersey has never had so many genuine candidates, especially if Casey keeps following Leinster’s Rowan Osborne into the provincial ranks. Ideally, Conor Murray would rediscover his best form, but he’ll be 34 at the next World Cup, so John Cooney or Luke McGrath could be the resident scrumhalf by then. Or Casey. It’s a fluid situation.

Penny’s potential seems unlimited but this season, while Van der Flier was resting, Will Connors has become the most effective chop-tackling flanker in the Pro14. Also, Leavy should return from his latest long-term injury to repeat the Herculean feats of 2018.

Caelan Doris is about to become the Ireland number eight. The 21-year-old and Kelleher at hooker, if fit, are the only lasting changes Farrell is due to make for the moment.

Leo Cullen has become the high priest of such artistry.

The team that presents itself at the next World Cup is largely known.

Age coupled with injury profile suggests Rob Kearney, Keith Earls, Robbie Henshaw, Sexton, Murray, Cian Healy and Peter O’Mahony will have been moved on by 2023. That may seen harsh on Henshaw – who will only be 30 – but his list of surgeries cannot be ignored.

Still, Farrell is expected to shape his team around 13 of the starting XV torn asunder by the All Blacks in Tokyo, but Earls and Healy will be 36 during the next tournament, Sexton 38, O’Mahony 34.

Possibly two from Murray, Sexton, O’Mahony and Henshaw will stay the course, mainly because elite sport is changing before our eyes.

Arguably rugby takes a heavier toll on its athletes, but the New England Patriots quarterback Tom Brady (42) remains – at least until this Saturday – the face of the NFL. Same goes for LeBron James, who at 35 is having an epic 17th NBA season with the Los Angeles Lakers.

Rowntree is right; the ultimate challenge for Farrell is knowing when to replace experience with raw ability. It seems highly unlikely that Sexton or Murray would play second fiddle, but it might be the last trick Irish rugby gets out of them – motivation being the prospect of closing out a World Cup quarter-final.

If Carbery can avoid further ankle damage his time is surely now. That said, Ireland are yet to fully experiment with the dual play-maker idea that could have altered the entire narrative of 2019.

Andrew Porter is another present-day conundrum. An ideal foil for Furlong at tighthead, what’s increasingly clear is that the young Dubliner’s phenomenal power is being underused. Cian Healy is still only 32 and playing tremendous rugby, but the old warhorse or Dave Kilcoyne can cover Porter at loosehead as Knox, Salanoa or even Jack Aungier eventually deputise for Furlong.

The propping stocks are decent.

What’s missing from the system remains the same as always: the promised army of Seán O’Briens and Tadhg Furlongs, that agricultural non-private-school-educated brute force essential if Ireland are to truly live with opponents that have rugby as their national game. This can only be achieved by the IRFU’s professional tentacles reaching into GAA and soccer territories. This is happening but not fast enough to alter the world order in the current, ahem, four-year cycle.

1 Seán O’Brien: Anger over my parents’ break-up never left me
2 Plenty of positives for Farrell as Ireland hit the ground running
3 Ireland braced for a daunting assignment in Paris
4 Will Connors chops his way to the front of Ireland’s openside queue
5 Nicky English: Extra game will improve both Dublin and already formidable Limerick
Real news has value SUBSCRIBE

Madness or defiance? The GAA is taking a huge gamble in staging Championships 06:00
Limerick’s warning loud and clear despite the eerie silence in Thurles 06:00
Will Connors chops his way to the front of Ireland’s openside queue 06:00
Ireland braced for a daunting assignment in Paris 06:00
Division Four round-up: Wicklow lay down Leinster marker against Wexford 06:00
Crossword Get access to over 6,000 interactive crosswords