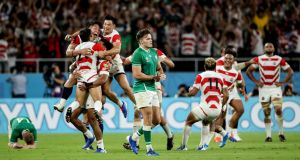 The best way to measure the true impact of the past rugby decade is to count the number of significant moments few could have foreseen. By that yardstick the 2010s must qualify among the more remarkable periods in the sport’s history, regardless of the naysayers who like to argue the game is not what it once was.

To say a bit has happened since Christmas 2009 – when Martin Johnson was in charge of England, France were about to win the 2010 Six Nations and an 18-year-old Beauden Barrett had just left Francis Douglas Memorial College in New Plymouth – is an understatement. Who could have predicted Japan would go on to win big at World Cup tournaments against South Africa, Ireland and Scotland, that Eddie Jones would become England’s coach or that the British & Irish Lions would still not have been beaten in a Test series a decade on?

The list is long and varied: professional contracts for female players, women’s and men’s sevens becoming major Olympic attractions, Exeter winning the English Premiership, the Barbarians touring Brazil, France on the brink of going through an entire decade without a male Six Nations title for the first time since the second World War. What about the previously indomitable quartet of Saracens, Leicester, Wasps and Bath, who filled the bottom four places in the domestic table heading into the final weekend before Christmas?

Finished yet? Not at all. A newly crowned Springbok World Cup-winning prop, Tendai Mtawarira, has signed to play in a professional club league in the US. Germany, Jamaica and Paraguay, among others, are about to send teams to a newly created World Rugby sevens tournament in Chile in February. Richard Cockerill and Jim Mallinder are both coaching in Scotland, while an Irishman has coached Italy and Graham Rowntree is coaching in Munster. If nothing else, the sport is broadening its horizons.

This is a trend with inevitable consequences: rugby has always had a global dimension but the old world order is shifting. Those who insist, for example, that the good ol’ United States of America will never be a rugby power may be in danger of eating their stetsons. If the US do not win an Olympic sevens medal of some description in Tokyo next year it will be a surprise.

The average international player, meanwhile, is fitter even than he was a decade ago and is playing a game that continues to reinvent itself in real time. A tackle that would probably have earned the coach’s approval 10 years ago will now attract a red card. Head injury assessments have thankfully ended the days of Bambi-legged players staggering on after sustaining concussion a la Australia’s George Smith v the Lions in 2013. Scrum impacts have also reduced, even if the time taken to complete one remains a problem.

There is only limited value in writing down a notional team of the decade – too arbitrary, too subjective – but the game still churns out rare individuals. David Pocock, Sergio Parisse, Sam Warburton, Johnny Sexton, Maro Itoje: withstand the physical and mental challenges of the modern game and you can cope with almost any challenge in life. Not everything in the allotment is healthy – far from it – but who could look at the next 10 years and conclude that rugby, as things stand, does not have further room for growth?

The increasingly active private equity company CVC and emerging digital broadcasters such as Amazon certainly seem to think so. By Christmas 2029 it could be that rugby’s map has again been redrawn, hopefully not at the expense of the less well resourced. By then it would be helpful if the Six Nations could grasp the nettle on promotion and relegation, the ever-expanding length of northern hemisphere seasons could be addressed and someone in authority acknowledged that a rigid defensive line of 13 players spread laterally across the pitch and frequently offside is not the future.

Plenty could hinge on who is elected as the next World Rugby chairman, with the incumbent Bill Beaumont seemingly poised to be challenged by his deputy Agustín Pichot. A win for the latter would accelerate the prospect of a World Cup in the Americas – possibly as early as 2027 but more likely in 2031 – which would give the game another far-reaching shake-up.

For now, though, that was the rugby decade that was. New Zealand were the most consistent international team and, in Richie McCaw, Brodie Retallick and Beauden Barrett, had the three outstanding players. They also delivered the most striking World Cup demolition of the decade, thrashing France 62-13 in the 2015 quarter-final with a display of absolute ruthlessness.

Even Wales’s and Ireland’s finest victories, though, could not eclipse Japan’s 2015 win over South Africa for drama, nor the Brave Blossoms’ first-half display against Scotland in October for positive intent. The Lions’ second Test win in New Zealand in 2017 was another next-level occasion for the ages.

Those suggesting this was a so-so decade for rugby have not been paying attention.