Ross Molony determined to kick on after cameo against Munster 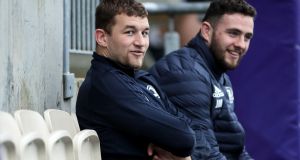 Leinster’s Ross Molony: ‘I was delighted to go down to Thomond Park and come away with a win. I have been down there four times, won twice, lost twice.’ Photograph: Laszlo Geczo/Inpho

The “replacements”, “the finishers”, the “bench”. Names vary but the remit remains the same: to make an impact. Ross Molony was summoned with 15 minutes remaining as Leinster clung on to a 13-6 lead over Munster at Thomond Park in last weekend’s Guinness Pro14.

The 25-year-old admitted that he was less enamoured with his first conspicuous involvement, the concession of a penalty, but he more than balanced the ledger in the final play of the game when managing to pilfer possession at a Munster lineout, five metres from the Leinster line. It was an important intervention in the context of the result.

He modestly downplayed his role. “The plan was in place for the lineout D [defence]. I just happened to get up into the right area, managed to get my hand on the ball. I gave away a penalty for offside a few minutes before which didn’t help us in that situation.

“I was delighted to go down to Thomond Park and come away with a win. I have been down there four times, won twice, lost twice.”

Molony offered an insight into the thought process behind Leinster contesting that ball in the air. “There were a number of factors. We would have obviously studied their lineout, known where they like to throw and known the personnel on the pitch at the time.

“Then, the conditions were a big factor. Even for us, we could only win the ball towards the front [because of the very strong wind]. I knew at that stage in the game with the pressure on them to score that a low-risk option, something towards the front, was more than likely. And I was lucky enough to have two props lifting me.”

Eight appearances and three starts this season are not the figures that he would have hoped for at the beginning of the season but he understands and subscribes to the ethic that team considerations supersede those of any individual. “I always believe that I’m good enough to play in the first team.

“You want to be playing in the European games, in the big matches. Everyone in this squad is going to get their chance. Some games are bigger than others but we are all working towards that goal of winning, putting ourselves into the knockout stages and, ultimately, winning trophies.

“It can be frustrating at times. I don’t intend to get too bogged down in it. You keep taking the opportunities you have, the moments you get on the pitch. It is not a very long career. You have to enjoy it while you are there. I have been sitting in this seat for a number of years now talking about this. I probably would have got a bit frustrated earlier in my career but, look there are bigger things in life.”

Molony’s words should be mistaken for acquiescence or a lack of ambition, a point he clarifies subsequently. “I haven’t settled for my place in the squad. I’m just absolutely delighted to get my chance. I know I am good enough to play in this squad. I can just keep doing what I can do. I can’t do anything else.”

Connacht who rock up to the RDS on Saturday evening (5.30pm), had Leinster beaten to all intents and purposes after 60 minutes of last season’s corresponding fixture before the home side rallied to nick the result. Molony recalled: “That match is one that stands out for me as one of the most enjoyable matches in my career; the last 20 minutes more than the first 60 but this is such a huge game for them.

“I was chatting to the likes of Cian Kelleher and Robbie [Henshaw] who have played over there and they know how much Connacht focus on these home and away games against Leinster. It is huge no matter what team they put out. Everyone is going to want to take a chip at us so they are going to come with that mindset.

“For us it’s not just about matching that but coming out on top of that battle. And it is going to be a battle on Saturday. We want to maintain our momentum.”