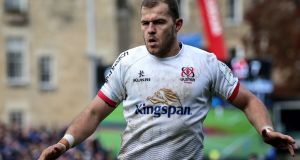 This is one that has been on Dan McFarland’s radar for a while. The reason? The last time Connacht visited Belfast for a regulation season Pro14 interprovincial, back in October 2018, they ended a particularly grim, and near 60-year record, by winning in Belfast.

Though, in many ways, Ulster avenged that evening by seeing Andy Friend’s side off in last May’s Pro14 play-off, the result from 14 months ago seems to have somewhat stuck in the craw for former Connacht player and coach McFarland whose squad also managed to lose at the Sportsground this time last season.

With mention being made this week of improving the record when contesting interprovincials - and the side for Friday night’s home game unsurprisingly undergoing 13 changes from the somewhat diluted one which came away with a rare bonus point from last weekend’s 54-42 loss to Leinster - it looks like Ulster are intent on putting in a mighty performance for their last outing of the year and, indeed, the decade.

Will Addison returns from his four-week suspension and is one of seven Ulster players who attended Andy Farrell’s Ireland get-together earlier this week who are togging out for the home side. Iain Henderson and Jacob Stockdale are the only two not involved for this game.

It means that McFarland has Marty Moore, Rob Herring, Stuart McCloskey, John Cooney, Billy Burns and Tom O’Toole all in the squad with the latter benching behind Moore.

Luke Marshall is also back to team-up with McCloskey in Ulster’s favoured midfield pairing while Louis Ludik comes in on one wing with the fit-again Robert Baloucoune starting on the other flank in what is an entirely changed backline from the one which played last week at the RDS.

Indeed, the only players retained from the Leinster match are lock Alan O’Connor and flanker Mattie Rea.

Prop Jack McGrath also returns from injury after undergoing thumb surgery in November. However, there is no sign of Jordi Murphy in the squad.

Friend has made a handful alterations to his side from the one which lost narrowly at home to Munster last weekend with Robin Copeland coming in and former Ulster and Gloucester prop Paddy McAllister getting the nod after returning from injury.

Caolin Blade is elevated to the captaincy this week and fellow Ireland camp attendees Dave Heffernan and Ultan Dillane also feature again though Quinn Roux, who was also with Ireland earlier this week, misses the game due to injury. Bundee Aki is stood down for this one.