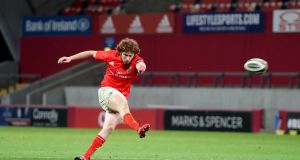 No less than last week away to the Scarlets, this was more gritty than great, more ballsy than beautiful, but Munster’s win over Edinburgh will have given the hosts huge satisfaction.

Missing around 10 or 11 front-liners, forced to cobble together new combinations late in the week, and to select a particularly inexperienced 9-10-12 axis, in trademark fashion Munster dug deep and found a way to win again. In the process, they have already beaten their main two rivals in Conference B.

The Irish province’s back play and running game again never amounted to much, their wingers hardly saw the ball and there were times when they were clinging on, not least with a try-saving and perhaps match-saving tackle by Andrew Conway.

But strong defence in the main, particularly in the second half, huge energy in everything they did, along with real energy and ballast off the bench kept them in the game. Then, cometh the endgame, in time-honoured fashion they resorted to their pack for CJ Stander to muscle over and Ben Healy to land the decisive kick for the second week in a row, his conversion augmenting six penalties from seven.

Tadhg Beirne and Rhys Marshall had big games in a pack of forwards who strained every sinew and the lively Craig Casey caught the eye again. As for Edinburgh, this was a big chance missed. Suddenly they cannot buy a win. This was their fifth defeat in a row.

For Healy, the 21-year-old academy outhalf who captained Glenstal to their first ever Munster Schools Senior Cup three years ago, this was a second start, his first having been in that significant loss to Edinburgh in Cork just under a year ago.

Helpfully, Munster and their young number 10 made an ideal start. Stander won a trademark penalty over the ball, when James Ritchie was pinged for holding on, and when the latter was then too eager in encroaching at the ensuing line-out, Healy opened the scoring. Within two minutes he added a fine penalty from 45 metres when Jeremy Loughman locked over the ball.

Munster’s fast line speed and aggressive tackling ensured some good defensive sets further up the pitch but, curiously, inside their own 22 they were altogether more passive, in turn leading to soak tackles.

When the Edinburgh maul inched at an angle infield, Stuart McInally broke through an unmanned fringe defence but the promising attack came undone through a knock-on close to the line by lock Grant Gilchrist.

Even so, after Stander was a little harshly penalised for having a second nibble when never really cleared out, Edinburgh went up the line. Ritchie was held up off the maul, but when Jaco van der Walt and George Taylor moved the ball out to Mark Bennett he fended off the debutant Alex McHenry.

Jack O’Donoghue almost pilfered a try when Damien Hoyland dallied and slipped in dealing with Casey’s kick and Healy did nudge Munster back in front with his third penalty for WP Nel’s tackle off the ball.

Conway will rue a missed opportunity when taking Rory Scannell’s good pass to him on the blindside touchline and chopping into acres of space inside the Edinburgh 22. But he opted to kick the ball on and caught it too hard on the half-volley infield toward the last defender, Hoyland.

Instead, after Mike Haley uncharacteristically failed to deal with a high ball, Hoyland found a good touch. Edinburgh came knocking again and again Munster’s defence was on the back foot, leading to WP Nel beating the tackles of John Ryan and Marshall on the fringe for the try.

Even so, after a gather and brilliant 35 metre run by Casey, beating four players, and Beirne’s strength in the jackal, Healy reduced Munster’s deficit to two points with the last kick of the half.

Within seven minutes of the restart Taylor looked sure to extend Edinburgh’s lead after Duhan van der Merwe chased down a hanging cross kick by van der Walt and he was put away by Nick Haining. But he was hauled down metres from the line from behind by Conway and Marshall, of all people, was on hand to complete the turnover.

Van der Walt did add three points after O’Donoghue was adjudged offside but after Hoyland kicked out on the full the sniping Casey was high tackled by McInally - although he still beat it. In any event, Healy landed his fifth penalty.

Soon after, he cleared to half-way with his left boot and Dan Goggin, making a welcome return after a long absence, made a superb tackle on Hoyland before Haining came in from the side as Stander looked for the turnover.

With Edinburgh now on a clear warning from Nigel Owens, van der Walt was then binned for seat-belting Healy, who also kicked Munster back in front.

But the outhalf then overcooked a grubber out of his own 22 and Darcy Graham beat O’Donoghue and Goggin to counter with his first involvement of note. When O’Donoghue was binned for a dangerous tackle, Bennett kicked Edinburgh ahead and superb work in the jackal by replacement James Cronin went unrewarded when Healy surprisingly missed.

Nonetheless, Munster opted to go up the line five minutes from time, Healy finding touch five metres out from the 10m line, and reverted to route one. Off Beirne’s take, the Munster pack kept it to themselves, nine pick-and-jams and one one-off ploy for variation culminating in Stander showing extraordinary leg power, with Cronin latching on to drive him over the line.

From about 15 metres to the right of the posts, Healy put his previous miss behind him to nail the conversion.

After a knock-on by Bennett in Edinburgh’s last attack, Conor Murray showed all his experiencing by not box-kicking the advantage away and after one dodgy scrum Healy kicked the ball dead.

1 Keith Duggan: Through the glories and the disgraces, we were all Maradona addicts
2 Diego Maradona dies of heart attack, aged 60
3 Andy Farrell to delve deeper into Irish squad for team to play Georgia
4 Darragh Ó Sé: Cork and Donegal went out with the wrong attitude
5 10 years on: The night Tiger Woods hit a fire hydrant and his world turned upside down
Real news has value SUBSCRIBE