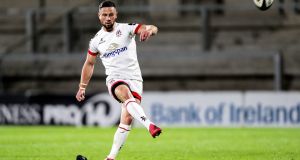 Ulster and Ireland scrumhalf John Cooney has been nominated for the Players’ Player of the Year award. File photograph: Inpho

There will be a new winner of the prestigious Players’ Player of the Year award after James Lowe, Garry Ringrose, Andrew Conway and John Cooney were nominated on the Rugby Players Ireland shortlist.

It is no surprise that the 28 year-old Lowe, who becomes eligible for Ireland in early November, has made the shortlist after maintaining his consistently high standard of performances into 2020, scoring six tries in his nine appearances.

Likewise Ringrose, who was made Leinster captain for the first time when they beat Ulster in the recent 2019-20 Pro14 final, has carried on his superb form through the 2019-20 season both for Ireland and his province, for whom he has scored 10 tries in 12 games since the start of last season.

Having turned 29, Conway is playing the best rugby of his career, finally becoming a starting Irish winger in the Six Nations for the first time earlier this year. In 20 games for both his country and Munster in the 2019-20 season, Conway scored 13 tries, augmenting his brilliant aerial game and work-rate off the ball.

Similarly, despite turning 30, Cooney also had something of a break-out season in 2019-20 when also breaking into Ireland’s Six Nations squad for the first time. In 20 games for Ulster last season Cooney - who like Conway was initially a product of the Leinster system - was a regular match-winner for the provinces scoring 10 tries in his haul of 184 points.

Last year James Ryan became the first player to scoop both this award and the Nevin Spence Young Player of the Year Award, the shortlist for which this year is comprised of the Leinster duo of Caelan Doris and Ryan Baird, and the Munster outside back Shane Daly.

Doris would appear to be the favourite, but he is as aware of Baird’s phenomenal athleticism and speed for a lock as everyone else.

“Obviously I see Ryan first hand every day in training. He’s an unbelievable specimen, a bit of a freak athlete. Some of the numbers in the gym and his speed and agility on the pitch is NFL standard stuff.

“He’s grown a lot over the last year or so. They saw quite a lot of the guys coming out of school can be a little bit raw sometimes, the same probably would have been said about me, but you can see his set-piece stuff and his decision-making improving a lot as well, so I think that more technical aspects matched with his freakish, athletic ability will lead him well.

“And you can see even his stride off the bench there on Friday, the raw power he’s got is incredible,” Doris added in reference to Baird’s individualistic try against the Dragons at the RDS last weekend.

“Shane Daly as well, yeah, he’s been going very well for Munster, he’s very good under the high ball and it’s tough playing against him. He spots a bit of space from a mile away and goes after it with pace as well. He’s gone very well as well over the last season.”

Doris’ nomination reflects a breakthrough 2019-20 season, when he cemented a place in the ultra-competitive Leinster backrow and made a short-lived Irish debut against Scotland due to concussion, before returning to make an eye-catching impression against England off the bench at Twickenham.

“Yeah, I’m happy with how I’ve gone. I think getting that exposure the season before last in some of the Pro14 league games, home and away. The regular season games especially, for me anyway, it took a little bit of time to get used to the speed and the physicality of all of that.

Top try scorer on the Men’s World Series in Ireland’s debut campaign, Jordan Conroy is in contention for the Men’s 7s Player of the Year award alongside last year’s winner Terry Kennedy and Harry McNulty.

Player of the Year nominees Conway and Cooney will also contest the Try of the Year award. Conway’s pace at the Ospreys in the Champions Cup and Cooney’s individual brilliance at home to Clermont in the same competition are joined by Robin Copeland’s last-ditch effort against Gloucester.

The influence of Irish rugby players on society has been in evidence throughout the past year, notably in highlighting the needs of charities at the height of the Covid-19 pandemic. The Zurich Contribution to Society Award recognises these efforts and nominees this year include Ultan Dillane, Billy Holland and Andrew Porter.

Before the rugby season stalled, the Irish Women’s XV enjoyed some success in the Six Nations with victories over Scotland and Wales. While the group will finish out the campaign in the coming weeks, the players have nominated Cliodhna Moloney and Linda Djougang for the Women’s XV Player of the Year 2020, while Edel McMahon, who will miss the remainder of the campaign through injury, is also shortlisted.

The retiring Louise Galvin is joined on the shortlist for Women’s 7s Player of the Year by Kathy Baker and Amee-Leigh Murphy Crowe, who has won the award on three previous occasions.

Galvin, who also serves as a RPI Executive Board member, said: “As ever, we have had good days and bad but it’s important not to let the 2019/20 season be forgotten. As the year has panned out, we have learned more about ourselves this year than any other. It’s important to reflect and acknowledge the achievements and challenges of a unique season.”

ZURICH PLAYERS’ PLAYER OF THE YEAR 2020

1 Gordon D'Arcy: I know what Joe and Cheika would do. Fix the basics
2 Darragh Ó Sé: Cork and Donegal went out with the wrong attitude
3 Connacht hopeful Papali’i’s red card against Zebre may be rescinded
4 Kevin McStay: Maybe a knockout All-Ireland Championship is the long-term solution?
5 Sean Moran: Bloody Sunday centenary weekend will live long in the sporting memory
Real news has value SUBSCRIBE