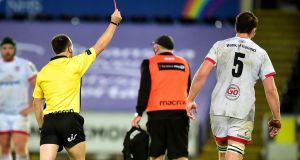 Ulster made it two wins from two in Conference A of the new Pro14 season with a convincing win over the Ospreys, but the victory was blighted by a red card for their captain Iain Henderson five minutes from time.

Henderson needlessly sought to shunt a standing Dan Evans away at an Ospreys ruck with an arm into the chest, but caught him first with a shoulder into the fullback’s jaw. Technically it was correct but there was so little force in Henderson’s shunt that it barely moved Evans back.

Otherwise, in front of the watching Lions head coach Warren Gatland, Ulster could feel well pleased with their night’s work. If anything the scoreline scarcely did them justice, the more pertinent tally being three tries to nil, with the Ospreys scarcely hinting at a try for 79 minutes.

On a strong night for Jack McGrath, who departed at half-time, and Marty Moore in the set-piece, Ulster’s scrum and line-outs were both superior, as was their kicking, aerial work and running game.

Marcell Coetzee underlined his value yet again with a typically big-carrying, all-action game and John Cooney also responded to his omission from the Irish squad with a much more confident night’s work. He box kicked well and finished off the try of the night.

The performance of the young midfielders Stewart Moore and James Hume belied their lack of experience and at fullback Jacob Stockdale rediscovered much of his attacking mojo, although his match-winning ability never really went away.

Alun Wyn Jones, Rhys Webb and Justin Tipuric all started for the Ospreys but they failed pretty miserably to back up last week’s eye-catching opening win away to Edinburgh. Not only did their set-piece malfunction, but their ball protection was at times lamentable and it was mainly their defence and Mike Adamson’s penalty count which kept them theoretically in the game.

From the off Ulster were rewarded for a bright start and their decision to turn down what would have been a routine 30 metre penalty for Cooney by going up the line after Adam Beard was pinged for playing the ball on the deck.

Their ball retention and clearing out was excellent as they hammered away through multiple phases, Marcus Rea piercing the Ospreys defensive line off Ian Madigan’s inside pass before Stockdale did likewise off the outhalf’s flat skip pass to open the scoring.

Cooney atoned for a kick out on the full when snaffling Rhys Webb to force a turnover. Hume then steamed onto a delayed pass by Madigan after the outhalf bought time when the Ospreys pushed up hard on the outside and kicked through to earn an attacking line-out. Again going through the phases off a big maul, Cooney made it 10-3 when Alun Wyn Jones was offside.

The Ulster pack turned up the heat at scrum time to earn a loudly celebrated penalty but Cooney opted for a long-range penalty which was well wide and, instead, Myler made it 10-6 at the break. That flattered the Ospreys.

On the resumption Stockdale quickly atoned for a loose pass to Matt Faddes at the end of a promising strike move off another solid scrum with a lovely counter-attacking chip and gather before beating three men on a slaloming run.

Nothing came off that when Madigan had a kick charged down but soon Stockdale made another line break from his 22 from Madigan’s pass. The Ospreys had improved their line speed and defensive work in contact, but interval replacement Eric O’Sullivan broke the defensive line off a wonderful, underarm offload by Coetzee in the tackle, and after Henderson broke Adam Beard’s tackle, Coetzee took Cooney’s pass to power through Keiran Williams for Ulster’s second try. Cooney converted.

However Ulster mucked up an attempted wraparound on their own 22, leaving Coetzee inadvertently offside and Myler kicked his third penalty.

Cooney had a chance to restore Ulster’s 11-point lead but missed a kickable penalty after a fine take and carry by Stockdale in heavy traffic before Ma’afu Fia was pinged for not rolling away.

Another promising attack following Cooney’s break and a big carry by Greg Jones came to nought when Kieran Treadwell went off his feet. Instead, the Ospreys replacement frontrow helped earn a penalty with which Myler made it a one-score game.

Although the Ospreys hadn’t created a thing they were also starting to win kicking and aerial duels, but after Treadwell pilfered one Ospreys line-out, Dewi Lake overthrew another.

Finally Ulster put the game to bed with the try of the night from a strike play off a solid scrum on half-way. Coetzee, as he does generally and as he did all night, generated go-forward ball off the base. From the recycle Hume pulled the ball back for Madigan on the wrap. He put the speedy Rob Lyttle through a big gap and Cooney offered a classic scrumhalf support line to finish well from outside the 22 and land the conversion.

The game ended on a sour note with Henderson’s sending-off and in the last minute the outstanding Coetzee, with the help of Jones and Louis Ludik, not only held up his opposite number Morgan Morris on the line but helped rip the ball from him.