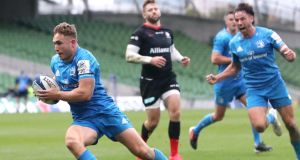 Hugo Keenan cheers on Leinster team-mate Jordan Larmour as he goes over to score a try in the Champions Cup quarter-final against Saracens at the Aviva Stadium. Photograph: Niall Carson/PA Wire

Taken in tandem with Jacob Stockdale again being selected at fullback for Ulster, Leinster’s decision to switch Jordan Larmour to the wing with Hugo Keenan swapping positions for their Guinness Pro14 opener at home to the Dragons might suggest that the two provinces were nudged in this direction by higher powers. But Leo Cullen maintained not too much should be read into what he called a small alteration.

“Jordan has played at No 15 over the last couple of weeks, but it’s just something we wanted to see, in Hugo playing 15 and Jordan on the wing, and what that combination looks like.

“It’s a small alteration, I wouldn’t read a huge amount into it.

“Playing on the wing probably gives Jordan a little bit more freedom to roam and it’s something that comes quite naturally to him. He’s played a lot of games on the right wing for us.

“So, we wouldn’t see it as a major alteration but Hugo has probably played a lot more at 15 coming through. When Hugo came into the team initially it was more as a replacement when Dave Kearney got injured. So, this is just something we want to have a look at.”

Although on the mend, with still no sign of Tadhg Furlong or Dan Leavy reappearing, Cullen estimated that they might not return until mid-October, meaning Furlong’s chances of playing in Ireland’s rearranged Six Nations games against Italy and France on October 24th and 31st are receding by the week.

“A lot of little things unfortunately that have stalled his return,” said Cullen of Furlong. “He’s got close a couple of occasions and has had a few false starts. He’s close to getting back and hopefully will feature. Whatever team that’s with, I’m not sure yet, but he’s making progress.”

Needless to say, collectively Leinster have not recovered from the acute disappointment of losing their Champions Cup quarter-final against Saracens two weeks ago, and Cullen didn’t disguise that.

“We’d been on a decent run until that point and it feels like it all came crashing down on top of us and you just have to pick yourself back up again.

“It’s a very unusual situation that we’re in. Other teams will have to go through something similar. It was certainly our plan to have played a semi-final last week and what we would have done around selection for this weekend maybe we would have tweaked slightly because we would have been looking to get ready for a Champions Cup final.

“Now we’re going to have to look in terms of a new challenge. The new challenge is getting the new Pro 14 campaign off on a strong footing and we’re all keen just to get going now. We want to put in a good performance and just get back at it, get back doing what we enjoy in terms of playing games and dealing with that day to day.

“It’s a game behind closed doors because of the state of play in Level 3 lockdown in Dublin at the moment but hopefully it won’t be too long. We’ll see some supporters up in Ulster at the weekend and so see how that goes, it’s another step along the way to getting back to playing in front of crowds.

“From our point of view, what can we control? We can control trying to prepare well this week, getting over the disappointment, to be honest, but it’s easier said than done because it meant a huge amount to the players and everyone involved in the club, that game against Saracens and unfortunately we came up short on the day.”

The lessons learned from that day, he said, revolved around the basics such as receiving restarts, the scrum and the maul.

“It hit the players hard, it really did hit them hard. It hit us all hard really. There was a huge sense of disappointment off the back of the previous week.

“After the game we talked a little about our ability to back things up in big game after big game. It is a real challenge for teams but that is where we want to be. When we saw this fixture list originally, we always knew that four-game sequence in particular was going to be a huge challenge. The intention was to get to a semi-final in Europe but we never actually got there. As time goes in we will take stock in terms of even some of the selections that we made.

“Did they work? Did they not? What would we do differently if we had our time again? So we will ask lots of questions of ourselves as coaches as well?”

As to whether they had any answers yet, Cullen said: “It is tricky because you are always asking the questions off the outcome – so if we had won the game would there be different questions that we would be asking? We are all geniuses in hindsight, aren’t we?”

1 Gerry Thornley: After 32 weeks the Six Nations is back up for grabs
2 Extremes of sweet and sour for Solskjaer as Man United show signs of revival
3 Arsène Wenger: Arsenal was a matter of life and death to me
4 Stockdale and Ringrose on board with expansive Irish game plan
5 GAA expected to go ahead with championship under Level 5
Real news has value SUBSCRIBE