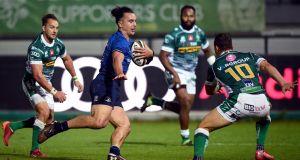 Jordan Larmour’s shoulder injury represented the collateral damage for Leinster in victory after a typically bruising encounter. The Irish province has found Benetton a troublesome opponent in the last few seasons and the latest instalment continued that trend.

Larmour was helped from the pitch on 48 minutes, sucking on an inhaler for pain relief, the upshot of a heavy contact to his shoulder while trying to make a tackle. Leinster head coach Leo Cullen admitted: “Jordan has taken a pretty heavy bang to his shoulder. We will get him assessed.

“You can see he was in a fair bit of discomfort and stayed down for a while. We don’t know the full extent, we will get him checked-up, scanned when we get back and we will see the extent of the damage.”

In the context of the victory Cullen admitted that “overall we are pleased but there are plenty of bits of the performance that we need to improve upon,” a fair summation. Leinster managed four tries, which secured the bonus point while denying their hosts a losing one; on the balance of the game Kieran Crowley’s side could feel slightly aggrieved to emerge with nada.

When precise and properly focused Leinster attacked effectively but on the flip side they were loose and careless in possession at times and some of the wounds were self inflicted in origin. The visitors lost the penalty count 12-8 - each team had a player in the sin bin at one point - and that allowed Benetton to get the field position to set-up their powerful lineout maul that yielded two of three tries.

There were some excellent individual performances, especially that of Ryan Baird, across all facets of the game; lineout, breakdown, carrying and support play. What was especially conspicuous was his footwork going into contact that enabled him to breach the gain-line by taking the tackle where possible on his terms: in general terms the younger members of the pack are equally eloquent advocates.

The backrow was very effective initially, James Tracy and Ed Byrne had some good moments, so too Hugo Keenan, James Lowe and Garry Ringrose behind the scrum, while Ross Byrne kicked beautifully. No one in blue was impervious to mistakes and that ensured the outcome remained in the balance right up until replacement, Ross Molony’s try in the 78th minute.

Leinster led 20-13 at the break with tries from Tracy and Lowe, with Ross Byrne’s accuracy from the placed ball contributing the rest.

Hooker Hame Faiva closed the gap to 20-18 with a try but then the visitors were correctly awarded a penalty try, followed by a Ross Byrne penalty that nudged them into a 30-18 lead. Replacement hooker Gianmarco Lucchesi’s converted try set up a fraught end game that was resolved when Molony muscled his way under some goal-line defence to touch down.

The bulk of Leinster’s front-line players leave for Ireland duty so it represents an opportunity when the Pro14 resumes for the province to test the depth of their resources. Cullen said: “We will get to see a lot of our younger academy players step into the breach. We will spend a bit of time now trying to upskill a number of the younger players.

“It’ll be a quick turnaround. We have a pretty exciting block of games to look forward to starting with Zebre in the RDS in a couple of week’s time.”