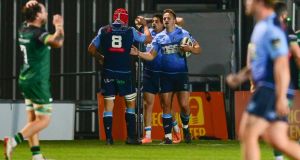 Three tries in the final quarter of the match put a gloss on the final score-line for the Cardiff Blues but there is no doubt that their victory over Connacht on Saturday evening was merited.

Connacht will rue the number of unforced errors and a lack of control and precision at times that undermined their ambition. Early injuries were also a factor for Andy Friend’s side.

The visitors will be unhappy with some of their defence, falling off tackles that proved costly on a number of occasions. They worked hard but some of the decision making and an overreliance on the boot made life a little easier than the home side deserved. The pack worked hard to a man with replacement Jack Augier, Conor Oliver, Eoghan Masterson and Jarrad Butler, getting through a huge volume of work.

Connacht survived an early scare following a break from Cardiff fullback Matthew Morgan but scrambled effectively to avert the danger a couple of metres from their line. The home side continued to dominate territory and possession and were eventually rewarded when Jarrod Evans kicked a penalty on six minutes.

The visitors also lost two of their frontrow to injuries in the first 20 minutes, Finlay Bealham and Dave Heffernan being replaced by Jack Augier and Shane Delahunt respectively. They managed to repel Cardiff’s early dominance but when they did get possession they were guilty of kicking a little aimlessly and giving the home side cheap ball.

There were a few brighter moments too though, Jack Carty making a couple of breaks around the fringes but Connacht were penalised several times at the breakdown inside the Cardiff 22. Overall Sammy Arnold was one of the few players who used footwork as well as physique to break tackles while John Porch and Alex Wootton also showed some nice touches.

The home side finally got the game’s first try five minutes before the interval, the two wings Josh Adams and Hallam Amos combining for the latter to touch down.

Evans added the conversion and the home side will have been reasonably content with their interval advantage. Connacht turned down a kickable penalty three minutes after the re-start, electing for a scrum but after several surges for the line Aungier lost control a metre short.

The Welsh side conceded a raft of penalties in quick succession and from the fourth, all within five metres of their line, tighthead prop Dillon Lewis received a yellow card. On the fifth transgression, playing with the advantage, Arnold’s power and offload allowed Conor Oliver to cross under the posts. Carty’s conversion was his last act, replaced by Conor Fitzgerald.

But it was Cardiff who responded definitely when a player down, centre Ray Lee-Lo picking his way past a couple of brittle attempted tackles to send Amos in for his second try. Another missed tackle allowed Adams to take play into the Connacht 22, and in trying to stop a three-on-one, Connacht wing Peter Sullivan knocked the ball down; the upshot a yellow card and a penalty try.

Replacement hooker Kristian Dacey crossed for the bonus point try on 73 minutes converted by Jason Tovey. Cardiff huffed and puffed for long periods of the game but deserved their win.

Darragh Ó Sé: Cork and Donegal went out with the wrong attitude 05:00
Fennelly eager for the chance to prove himself again 01:08
Ed Byrne, Johnny Sexton and Rob Henshaw to miss clash with Georgia 01:00
Simon Easterby admits Ireland may need to take new line on maul 01:00
O’Neill braced for meeting with his native county 01:00
Here is your handy guide to sport on television this week