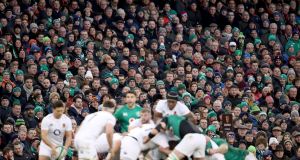 Ireland take on England during the 2019 Guinness Six Nations at the Aviva Stadium. Photograph: Dan Sheridan/Inpho

The Six Nations are considering putting back the start of next year’s tournament because of the financial consequences of playing matches either behind closed doors or before a small number of spectators at a time when the unions are all making cutbacks enforced by the pandemic.

The English Rugby Football Union (RFU), which will host three matches in the 2021 tournament, says it would lose £60 million (€65 million) if fans are locked out. The union’s Irish, Welsh and Scottish counterparts are also fearful of how they would fund their community games if they went a year without receiving any income through the turnstiles.

IRFU chief executive Philip Browne indicated earlier this year that if the absence of crowds were to extend into the 2021 Six Nations and the bumper home games against England as well as France, that could cost the cash-strapped union another €16 million.

“Who knows when the Six Nations will be played [next year],” the Wales head coach, Wayne Pivac, said after announcing his squad of 38 players for the autumn internationals that includes a rearranged 2020 Six Nations match against Scotland in Llanelli.

“There is talk that it could be pushed out slightly looking at what the virus might be doing. Discussions are ongoing. Unions are desperate not only for matches to go ahead but to make sure crowds watch them so we can meet our financial obligations to the game.”

The 2021 Six Nations is scheduled to start on February 6th. The RFU hoped to have crowds back in time for the Autumn Nations Cup tournament next month, but the British government has delayed a gradual return of spectators to sports grounds in England which was due to start last week. No new date has been set.

“Everybody is feeling the financial impact,” said Pivac. “Everyone would like to see it back where it was pre-Covid, full crowds. It is about making the best decision based on the well-being of the community and the financial position.”

Some English Premiership clubs have raised the question of whether the start of the new league season should be pushed back from November 20th with the lack of gate income, and as yet no financial support from the government, threatening to push some of them to the brink of bankruptcy.

“Without support we are in danger of clubs at the heart of communities across England, as well as players and volunteers, disappearing,” the RFU chief executive, Bill Sweeney, said. “If there are no fans for the Six Nations we will see a £138 million (€150 million) reduction in revenue with a loss of £60 million, preventing investment in areas such as the women’s elite game and community rugby.” – Guardian