Gerry Thornley: Ireland performance so good it was almost wasted on Italy 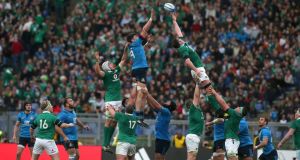 Out of reach: Ireland ran in nine tries against Italy in their RBS Six Nations game in the Stadio Olimpico in Rome. Photograph: Giuseppe Fama/Inpho

Ireland were everything you thought they might be . . . and maybe even a little bit more. A bonus-point win, the first of its kind after Ireland secured the first bonus-point defeat a week ago, was secured in the first-half at a time when Ireland were reduced to 14 men. It was so good that, truth be told, it was almost wasted on Italy.

It elevated Ireland to second place in the table and there they stayed after results elsewhere over the weekend. On a glorious, sun-drenched day with temperatures around the 18 degree mark, an estimated 10,000 Irish fans made the pilgrimage to the Eternal City. Vast swathes of empty seats and a relatively supine Italian side made for the ideal antidote to last week’s Murrayfield muck-up.

Having brooded on that all week, Ireland were also everything they talked about being: accurate, precise, ruthless and even indulging in a little instinctive offloading (there were 16 in total) and counter-attacking. They showed up for carries and cleared out with such efficiency that the official match stats credited Ireland with having recycled 119 rucks out of 119. Ireland had a similar return off their own scrums and lineouts. Even Joe Schmidt would have to be reasonably satisfied with that.

The Azzurri were even depowered in their one traditional area of renown, the scrum, and ultimately one penalty try off their maul – and the sinbinning of a relatively innocent Donnacha Ryan – was scant consolation or even cause of much angst for Ireland.

Ireland’s line speed in defence was markedly improved, as was their hunger to hunt down the carrier. CJ Stander, Jamie Heaslip and debutant Niall Scannell, making a seamless Test debut in the absence of Rory Best, led the way with 11 tackles apiece.

“I think the line speed and intent was really good,” said Schmidt. “Again, if you look at periods of the second half against Scotland, I think there was evidence of it as well. And it was consolidated today and hopefully what we showed last week and consolidated today gives individuals confidence that they can be really effective and proactive defensively instead of, you know, you can’t wait and watch good teams play at you. You’ve got to somehow keep the pressure on them even if they have the ball.”

Scannell was eased into his new environs with a dominant first two scrums on Italian put-ins. He then had a couple of clear-outs and a big carry as the springboard to a 17-phase attack which culminated in Stander scoring Ireland’s second try and the first of his hat-trick. 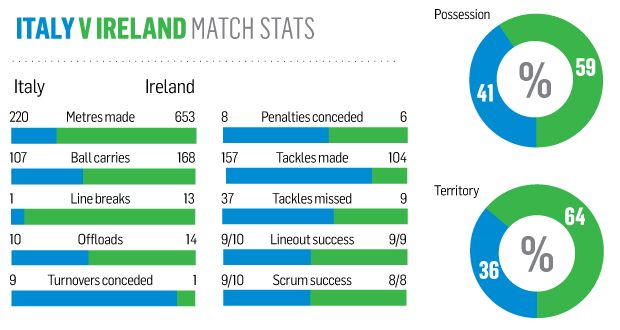 Behind such a dominant lineout and scrum, the Irish backrow of Stander (22 carries for 73 metres, including his three tries to yet another man of the match award to add to his vast catalogue), Heaslip (16 carries for 46 metres) and Seán O’Brien (15 carries for 24 metres) were rampant. They weren’t just battering rams either, all three coming on to the ball from depth with good lines from feeds by Conor Murray for Stander to complete the first hat-trick by a forward in the championship.

The result constituted a record-winning margin for Ireland in the Six Nations, usurping the 60-13 win in Lansdowne Road in 2000. That was the day Ronan O’Gara kicked 12 from 12, with six conversions and six penalties. Here, Ireland dealt solely in tries and conversions, and their tally of nine tries also equalled their championship record of nine tries in a match, also established over Italy in last season’s 58-15 win in round four.

Seldom, if ever, has an Irish back three ever been afforded so much time and yardage on the ball. In addition to Stander’s hat-trick, Keith Earls chipped in with two tries. Simon Zebo also did as much as anyone to set the tone, including one lovely in-and-out finish on the cutback from Jackson’s switch by Garry Ringrose. Ringrose was as potent as a hard-carrying inside centre after Robbie Henshaw’s departure as he had been at outside centre.

Then there was a 32-minute hat-trick off the bench by Craig Gilroy, including a couple of long-range finishes which demonstrated his footwork and pace. It including a freakishly lucky bounce off an agricultural “hoik” by Stander, who even had a kicking assist to go with his trio of tries.

Yet, typical of Schmidt, when asked to extol Gilroy’s finishing, instead said: “I thought it was a mixed bag for Craig. There were a couple of defensive things, positionally, that I think he’ll learn from. He was the recipient of one of the most outstanding tactical kicks I’ve seen in a long time from CJ Stander.

“CJ swears that it was meant to come off the side of his foot like that so he could get the relevant spin to get it into Craig’s hands. He doesn’t need too many invitations when the ball bounces. He is quick, his ability to change direction is very, very good and he took a nice high ball at one stage. He ticked most of his boxes really well.”