Rhys Webb feels the pain of the win that got away 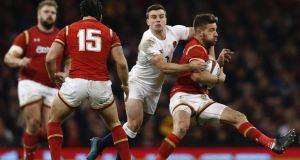 It proved a spectacular finale to a stunning Six Nations encounter in Cardiff, yet Wales could only reflect on one that got away, their title hopes dealt a severe blow.

“We were there for 67-68 minutes, and the last 10 minutes, maybe we lost our composure,” Wales scrumhalf Webb said. “Aspects of the game didn’t go our way when we needed them to.

“We know that we need to play for the full 80 minutes. We’ve talked about that before.

“We played some great rugby at times, but it was basic errors that crept in during that last 10 or 12 minutes. We can’t afford to switch off.

“It is difficult to take as a loss, to be honest. I don’t think we deserved that result.

“If we are going to beat a team like England, who are doing well on a good run with that winning habit, we need to be focused and stay calm for the full 80 minutes, and we didn’t.

“We will be harsh on ourselves next week because that’s a victory gone missing for us, we believe. We will rest up, recover and go again.

“We had a good feeling in camp all week, and for 67-68 minutes we played some great stuff. It was very quiet in the changing room. We know we played well — but we let the win go.”

Scotland at Murrayfield are next up for Wales in a fortnight’s time, before games against Ireland and France, and while the agony felt during England’s late, late show will not quickly fade, they can at least reflect on their best performance of the season.

Wales flanker Sam Warburton added: “We just need to get better in the last 10 minutes. That was the message from the coaches, and all the players agree.

“One of our big targets going into the game was to try and keep the penalties down as much as we could.

“The message came on that we had given away four penalties in a 12-minute period, and they got a lot of territory from that in the first half and scored a try.

“Discipline was one of the main messages going into the game, and perhaps, on occasions, we gave away a few too many penalties.

“We knew it was going to be a massive task to beat them, but they have proved over the last 12 months why they are such a good team, and they played extremely well.

“It felt like an arm-wrestle the whole way through. It was one of those games which if either team had lost, that team would have been disappointed.

“We’ve got three games now which all become must-wins because we want to win the championship. And we have obviously got to rely on other results as well.”

Warburton, meanwhile, allayed any concerns after he took a knock to his shoulder during the closing stages, stating that he should be back in training on Tuesday.

And wing George North, who missed the England match due a leg injury, is set to be fit for Scotland on February 25th.

Wales boss Rob Howley said: “It was pretty evident (on Saturday morning) that the haematoma hadn’t settled, which is pretty important.

“In the concept of the week and how big a game it was, you want your best players playing these games, and George wanted to be given that opportunity.

“We gave him every opportunity, and on Saturday morning it was fairly obvious that we would be putting him at risk if he started the game, so hopefully we made the right decision. He will be fit for Murrayfield for selection.”