CJ Stander: 'It’s easy if everyone plays their part' 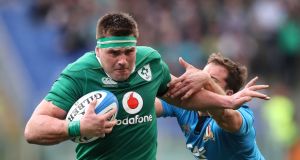 CJ Stander shows his determination as he brushes past an Italian challenge at the Stadio Olimpico on Saturday. Photograph: Billy Stickland/Inpho

CJ Stander and Craig Gilroy are standing a few metres apart, separated by a phalanx of camera crews and microphones but there is a common line of questioning.

Each scored a hat-trick of tries in Rome, Stander racking up the usual impressive numbers, leading the tackle category (10) and also carries (22) while annexing yet another man-of-the match award and Gilroy (most metres made, 89), a 32-minute second half cameo after replacing Robbie Henshaw.

Scoring tries though is not the ultimate barometer of performance for Ireland coach Joe Schmidt. The devil is in the detail and his appraisal of the respective performances of Stander and Gilroy illustrated that assertion. The calibre of the opposition would also have been factored into the equation. It was a tough afternoon to be an Italian coach, player of supporter.

He said of Stander: “I thought CJ was really good even if you leave the try scoring aside and the tactical kicking (a tongue-in-cheek reference to his relieving hoof that led to a try for Gilroy). I thought he got off the line and got through real volume of defensive work.

“A lot of what he did didn’t result in tries but resulted in positives for us. He is a really positive contributor, a really willing contributor; one thing I would say our backrow have big engines and they put themselves about in terms of the amount of times they have involvements; it’s very high, and certainly helps us negotiate our way around the pitch.”

Typically low-key, Stander sought to deflect the kudos, championing instead the change in mindset and application from the previous weekend’s defeat to Scotland. “We were disappointed from last week, we didn’t start the game in the right way.

Gilroy’s try-scoring exploits – the first hat-trick by a replacement in a Tier one test match since Springbok Deon Kayser in 1999 –  didn’t inure him from one or two glitches that Schmidt picked up on, albeit while praising the Ulster wing’s general contribution.

“I thought it was a mixed bag for Craig. There were a couple of defensive things, positionally, that I think he’ll learn from. He was the recipient of one of the most outstanding tactical kicks I’ve seen in a long time from CJ Stander. CJ swears that it was meant to come off the side of his foot like that so he could get the relevant spin to get it into Craig’s hands,” said Schmidt.

“He [Gilroy] doesn’t need too many invitations when the ball bounces. He is quick, his ability to change direction is very, very good and he took a nice high ball at one stage. He ticked most of his boxes really well.”

The player himself admitted: “I was delighted; you just want to make an impact I suppose. It came off the back of a lot of hard work from the boys. I’m delighted to be involved and get that win.”

There was a uniform message from the players; no one getting carried away, instead recognising there will be tougher days ahead in the tournament. Keith Earls, who racked up his 21st and 22nd tries for his country, was another to adopt a low-key stance.

“Fair play to the forwards, the two tries I got were handy ones. The forwards did all the hard work on the inside. It was Kearns [Rob Kearney] and Jacko [Paddy Jackson] who put me away. We knew we had to come over here and put in a big performance and thankfully we did.

“That just shows you the collective, it wasn’t something that we had last week but we bought into it this week.”

For all concerned it wasn’t all about the tries in Rome.