Niall Scannell grabs his chance with both hands 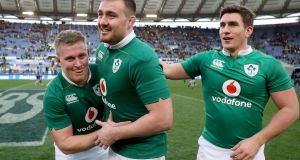 Niall Scannell provides a voiceover to the tickertape of images, a mishmash of firsts, scrum, lineout, carry and tackle that formed the jigsaw of his Ireland debut at the Stadio Olimpico in Rome.

Fortunately all the pieces were there for the 24-year-old, none missing from his game in what proved to be an auspicious Test match bow. The circumstances of starting were a little more fraught than normal, Ireland captain Rory Best failing to recover from illness, having missed the captain’s run on the Friday.

Scannell was told mid-morning on the day of the game but mentally and physically he was prepared to start, a tenet of the culture under Ireland coach Joe Schmidt that demands pitch-perfect knowledge of the role in question.

It doesn’t allay the nerves but when they kick in, it’s easier for a debutant to lean heavily on the meticulous training ground preparation.

“I was obviously quite nervous going into it being my first cap, probably a bit disappointed not to get on against Scotland last week but the circumstances just dictated that was the case,” said Scannell.

“We weren’t sure what the story was [in relation to Rory Best]. My usual attitude would be to be prepped for everything because in the professional game these things happen all the time. It was confirmed [Saturday] morning he was out. So it was good to have those few hours to take a deep breath, get settled and know what I had to do for the day.”

He was grateful for the assistance and advice Best has given him since he came into the Ireland camp.

“Rory is our captain and he was going to be given every chance to come through, unfortunately he just wasn’t able to. The consecutive Six Nations involvements he has (51) is frightening, so he must have been pretty bad not to take part. I only heard late but Rory has been very good to me the last few weeks, building me into the set-up and helping with calls and everything. Knuckle down “He’s been top notch. I was disappointed for him but then quickly had to switch over to making sure I could fill his boots a bit. He spoke to me on Friday night just saying he was a bit ill so be ready to start.

“To be honest, he gives me messages all the time and helps me with every aspect of the game. It’s no different the last few days. He helped me get prepped to where I needed to be. There wasn’t anything special needed today.”

Players shroud themselves in routine, a self-defence mechanism against having too much time alone with their thoughts. There is nothing more emotionally and physically draining than playing a match before it starts. He was inured from the texts and messages that had flooded in the previous week when he made the match-day squad by flicking the switch on his phone that said, ‘do not disturb’.

“You just have to knuckle down. From [Saturday] morning, I wasn’t really interacting with people. That’s what I’d do for most big games so I did the same and tried to stick to routine as much as I could, then build into the game from there.”

He did so quite beautifully from the opening throes of the contest, two robust, clear-outs, a perfect spiral for the first throw and an integral part of a first scrum penalty. Then on 11 minutes, a muscular carry in the build-up to Keith Earls’ first try and six minutes later, a broken field cameo.

Snaffling a loose ball from a ruck, he made 30-metres, before being grounded as he threatened the Italian 22; CJ Stander would go on to score less than 60-seconds later. Scannell admitted: “It settled me a bit, got me into the game. There were other aspects of the game we weren’t clinical at. It gave me a lift, probably calmed me.

“It was good to get my hands on the ball and get involved. All those things are kind of bonuses. All the way through you’re thinking, get your set-piece right and get the throws and scrums right.

“But I got my hands on the ball and defensively I made a few hits, that’s all you can look to do. Fit in and give the team what they need. At the moment, I think I did that but I’ll have to review it and there’s probably a lot of things to work on.”

He needn’t worry too much. There was just one more thing to do, collect €5 from his brother Rory, who predated him in the Ireland squad but whom he pipped to a first cap.