Leo Cullen’s side claim bonus point against Treviso in Italy 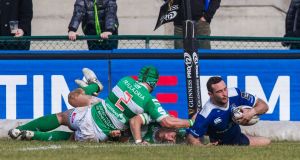 Leinster maintained the pressure on Guinness Pro 12 leaders Munster with a try bonus-point victory in Treviso, a win that puts them back within four points of top spot and just three points behind the Ospreys in second.

It was also a positive day for a number of returning Leinster players with Dave Kearney, Joey Carbery and Mike Ross all coming through the game unscathed having been out of the game for the last few months with ankle and hamstring injuries. Welcome news for head coach Leo Cullen and for Ireland coach Joe Schmidt.

Leinster started the scoring after only 57 seconds when Rory O’Loughlin crossed the line for try number eight of his extraordinary breakthrough season. A delicate chip over the top by Ross Byrne was gathered by the former St Michael’s man who slid under the posts.

However, Leinster didn’t have it all their own way as Treviso dominated proceedings for the next 20 minutes and only great cover by Leinster fullback Zane Kirchner, on two occasions, and a last-ditch one on one tackle by Ross Byrne on Andrea Pratichetti kept Treviso at bay.

It was a spill in midfield by Treviso that gave Leinster their next opportunity. Dominic Ryan capitalised and tore up the middle before a delicate pop pass to Ian Nagle got Leinster on the front foot. It wasn’t long before Dave Kearney was crossing unopposed in the left corner.

Four minutes later and it was Kearney again over in the same corner, this time after great hands out wide by Jamison Gibson-Park and O’Loughlin.

Treviso got the try their efforts deserved just before half-time when Julian Barbieri drove over from close range. Former Leinster player Ian McKinley added the extras to leave the home side trailing 7-21 at half-time.

Leinster weren’t long into their stride in the second half and the bonus point try duly arrived on 49 minutes when Naas man Adam Byrne crossed wide on the right. Ross Byrne added the extra two points from the most awkward of angles.

Once again, Treviso came back and were unlucky with a number of line breaks before a Pratichetti got the try on 54 minutes with McKinley again added the extras.

It was then the turn of the other returnee to get in on the act as Carbery crashed over from close range on 64 minutes. Cullen then unloaded the rest of his subs and it was another substitute, Bryan Byrne, who again went over from close range after 71 minutes to make it 14-38 with Ross Byrne again adding the extras.

Jack Conan, Carbery and Adam Byrne all went close late on as Treviso had a man in the bin but Leinster would have to make do with a professional six-try win in Italy with Kearney picking up the man of the match for his efforts.

Next up for Leinster is a very quick five-day turnaround with Edinburgh the visitors to the RDS Arena next Friday evening.