Liam Toland: Ireland thrived by having deeper box of tricks 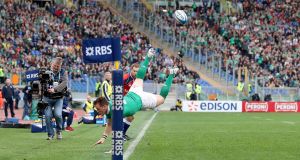 Nine tries to one with two hat-tricks. Craig Gilroy scored his between the 68th minute and full time, which is one try every four minutes. And there we were beforehand, hoping for a team try every 20 minutes for a win and a bonus point. After ‘busgate’ there was always going to be a reaction.

The energy levels of all were vastly improved but especially from the senior players. Conor Murray was infinitely more energetic, as was Jamie Heaslip. Murray’s position is totally secure but there’s definitely grounds to examine the balance of the backrow, where I feel Josh van de Flier has huge merit in starting; but who to leave out?

All three starting backrowers performed brilliantly, with Heaslip carrying way more ball in his old style: aggressive selection of lines, pumping his legs and turning his head to hunt for an offload. This he did countless times and his pass to Robbie Henshaw on 17:29 was a beauty – not just the pass but the fact Henshaw had fed Heaslip before receiving the return.

Niall Scannell’s opening three minutes were perfect. Heaslip carried from Zebo’s catch from the Italian kick off; Scannell cleared him out. From the resultant Murray box-kick and phenomenal Simon Zebo catch, Scannell cleared him out; to be first man was a superb effort. Moments later in his first international scrum, Scannell and his two props earned a turnover penalty from the Italian put in.

Off the subsequent lineout, Scannell hit his first target, a clever call to Donnacha Ryan at the front, Munster man to Munster man. Later he was to add ball-carrying in broken field but those opening three minutes were the perfect entry to international rugby.

His performance, and Ireland’s, was underpinned by accuracy, energy, aggression and defensive line speed; but the overarching ingredient was variety. On Friday I wrote about our counter-attack. Paddy Jackson, in the left-hand side tram tracks, received off a poorish Italian clearance kick on 4:05. He immediately fired out to Keith Earls who faked and cut back towards the touchline where he hit Jackson, who hit Zebo.

The Italian defence, like so many before them, assumed the Irish would simply truck it up into heavy traffic, and honey-potted there. This ever so subtle interchange between Jackson and Earls afforded Zebo some space and, after a wonderful pirouette, off he went charging down the line.

Our two big boys were subtle also. Off Scannell’s first lineout, Murray fed Seán O’Brien, who had been in the scrumhalf’s slot. He angled around the corner and with Italy sweating on him he popped the softest of passes to the onrushing Henshaw, who had a slight opening as a result. O’Brien was to interplay often with CJ Stander in a game of cat and mouse with Italy.

This style worked off turnover ball where Ireland also brought variety, such as the 56:30 lineout steal. Inside the Irish 22, Devin Toner stole and the obvious box-kick was ignored with Murray finding his outhalf who continued, with Zebo receiving out on his left wing. After drilling down the tram tracks, Ireland had gained 58 metres with massive pressure on Italy.

Off Irish scrums, Italy were under so much pressure due to the platform and Murray’s many varied options that they had no choice but to abandon the offside laws in an effort to stymie the Irish ball-carriers.

Scores flowed, and yellow cards should have too. Ireland varied their defensive structures also. Clearly their line-speed was up, because it was, but also because Italy struggled to get any real speed in their continuity. But Earls, for instance, was also stricter in his closing of the door before it opened where he was intent in getting into the passing Italian line long before a threat arrived.

On 58 minutes, as Dario Chistolini exited injured, I noticed a wonderful conflab between Murray, Jackson, Heaslip and Stander; all leaders and at ease with their brief and a job well done.

Variety in sunny Rome against a reeling Italian side is one thing, but as the weeks tick by can we hope that the offloads, the changes of angles, the burgeoning counter-attacks, the deft George Gregans, the variety of points of attack, the alternating defensive systems, the tip-on pass, the pull-back pass in heavy traffic to get outside runners in space, the creative first-phase plays especially off the solid scrum and so many other options are to be expected, encouraged and executed?

As for Italy? Well, Conor O’Shea and his very experienced management team had the same real-time statistics from their bank of computers. Over the Six Nations O’Shea will convert that swathe of information into intelligence and know that they must be judged on different metrics to Ireland.

In reality, of their 23-man squad, 18 play their rugby in Italy. Treviso and Zebre lie bottom of the Guinness Pro12 with 20 points between them. Italian rugby is not in a good place benchmarked to Ireland but there are subtle improvements that can offer a glimpse into a more positive future. Our Pro12 needs them and so too the Six Nations. Rome every two years is a wonderful experience. I trust that in 24 months we’ll have a much tougher experience.