Pat Lam: ‘There’s a lot of rugby to play, we can still close that gap on the top six’ 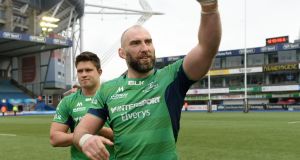 Connacht left it late to keep their faint hopes of a European Champions Cup place alive with a dramatic 19-13 triumph at Cardiff Arms Park.

The scores were locked at 13-13 heading into the final two minutes after Nick Williams burrowed over the Blues and Matt Healy crossed out-wide for Connacht.

The boot of Gareth Anscombe had moved the Blues 13-0 clear in the first-half, but John Cooney reigned in the lead with eight points of his own.

Jack Carty missed a late drop-goal, but Tiernan O’Halloran showed him how it was done moments later to snatch victory. And Craig Ronaldson’s penalty in the final act sealed a deserved triumph for Pat Lam’s side, and the Connacht director of rugby is not giving up the chase for the top-six.

He said: “There’s a lot of rugby to play, we can still close that gap on the top six, all we can focus on is getting the points and keep chipping away.

“I’m very proud to come here and do the double after two frustrating games in the last two years, to get one over the line is extremely pleasing.”

Lam’s men knew a victory would haul them back to within touching distance of the Blues and keep their slim European Champions Cup hopes alive.

John Cooney missed an early chance to seize the advantage, but Gareth Anscombe made no mistake for the hosts from exactly the same range 10 minutes later.

And the New Zealand-born Wales international stretched his side’s lead to six points at the end of the first quarter with another penalty kick from an identical position.

Both defences were very much on-top in the first period, but the breakthrough finally came just before the half-hour mark.

Willis Halaholo left a trail of defenders in his wake as he jinked 40 metres downfield, the Blues then laid siege to the Connacht line, and Nick Williams burrowed over to score. Anscombe converted to take the Blues 13 points clear.

But Healey pulled the Galway side back into the contest just before half-time. Hooker Tom McCartney broke free in midfield and almost got over the line himself before Jack Carty found Healy in space for an easy run-in.

Connacht began the second-half with a powerful scrum, and moments later they had a penalty which Cooney converted to cut the gap to three points.

The hosts responded with a spell of sustained pressure, with Josh Navidi cutting through to put them on the attack.

It resulted in a penalty, but Anscombe’s kick against a strong wind smacked the post.

Connacht kicker Cooney used the breeze to his advantage to level the scores at 13-13 with 17 minutes remaining after some ferocious defence earned a penalty.

They then spurned two golden opportunities to snatch victory when Niyi Adeolokun and Healy knocked on metres from the line.

Carty then missed a drop-goal in the 78th minute, but O’Halloran landed one of his own a minute later before Ronaldson’s long range penalty sealed the 19-13 triumph.