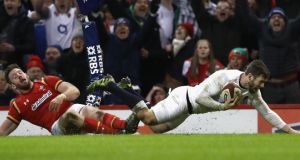 Ireland’s nine-try rout of Italy on Saturday helped get their Six Nations campaign back on track following their opening defeat to Scotland.

Joe Schmidt’s side had a bonus point secured within the first half in Rome and went on to win 63-10, leaving them in second place in the table.

However despite their rampant victory man of the match and hat-trick hero CJ Stander has said Ireland are still not back in the mix for the championship - and he has a point.

With Wales unable to hold off defending champions England in Cardiff - losing 21-16 after a late Elliot Daly score - Ireland’s title hopes are now hanging by a thread.

Schmidt’s side have their three toughest fixtures to come - at home to France, a trip to Wales and the final round visit of England - and with the bonus point system now in place three wins is unlikely to be enough.

Ireland now have six points thanks to Saturday’s bonus point win and a losing bonus point picked up in Edinburgh.

If they go on to beat France, Wales and England without a bonus point - a stern enough task in its own right - they would finish the championship with 18 points.

England currently sit top of the table with eight points after narrow wins over France and Wales - and their next two fixtures see them welcome Italy and Scotland to Twickenham.

Conor O’Shea’s Azzurri were lamentable against Ireland and it is hard to envisage anything other than a bonus point win for England when they visit London.

If Eddie Jones’s side then go on to win the Calcutta Cup - which is highly likely - with a bonus point they would travel to Dublin on the final weekend leading the championship with 18 points already on the board.

This would leave Ireland needing to beat England at the Aviva Stadium with a bonus point in order to finish above the defending champions on 19 points.

A win without a bonus point would leave the sides level on 18 points - meaning points difference would decide who wins the championship.

And while Ireland’s points difference is currently far healthier than England’s - 48 points to eight - that is likely to change during the next two rounds of fixtures.

This means that barring Italy performing a miracle at Twickenham - or more realistically Scotland limiting England to three tries or fewer in round four - Ireland will need a bonus point win against France, at the very least, to give themselves a real chance of winning the Six Nations.

If they can score four tries against Les Bleus in Dublin - which is hardly straightforward - before beating Wales in Cardiff, Ireland would have 15 points heading into the showdown with England on March 18th.

But even then an Ireland win might not be enough, as if England secured a losing bonus point the two sides would be level on 19 points and again points difference would come into play.

So ultimately, the grim reality is that Ireland really need to beat France and then either Wales or England out of the gate if they want to win the championship.

And while France’s open style might lend itself to a Dublin try-fest the prospects of breaching Wales’s miserly defence four times at the Millennium Stadium are very slim.

The chances of doing the same to England are even slimmer.

Ireland may be back on track in the Six Nations - but it is going to take a herculean effort from here to win the title back.