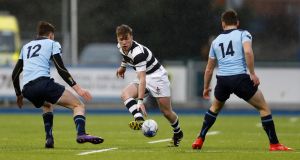 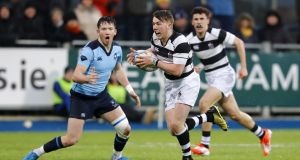 A two-try blast in the opening quarter from fullback Hugh O’Sullivan and left wing Jordan Wilkes gave Belvedere control which they never really lost in this Leinster Schools Senior Cup quarter-final at Donnybrook.

The champions came into this with a question mark over their ability to win enough ball against the bigger, much taller St Michael’s pack. The near-freezing wind-chill factor was worsened by rain, making handling a liability.

St Michael’s were slow to adapt their game plan, refusing to narrow their focus. Initially, outhalf Harry Byrne gave them encouragement from a seventh-minute penalty.

The knack of the holders for striking from unlikely positions was evident when O’Sullivan burst clear after not being held in the tackle to also convert in the 15th minute. Then, David Hawkshaw’s grubber was deftly collected by Wilkes for 12-3 in the 19th minute.

St Michael’s looked to play off their impressive lineout and Byrne kicked three to reduce the difference in the 29th minute.

Belvedere captain Max Kearney was simply sensational on the ground against the more upright work of the St Michael’s superb locks Jack Dunne and Ryan Baird.

The patience of the holders was the key to creating the opening for number eight Ruadhan Byron to surge to the posts. O’Sullivan then turned five points into seven for 19-6 in the 40th minute.

This is when the to-and-fro nature of the contest really took off. St Michael’s hooker Stephen Judge was held up over the line before Dunne powered through, with Byrne slotting the conversion.

It got even better for them when Belvedere flanker Conor Doran was sinbinned for a hit after the whistle. This was when Kearney stepped in for a wonder steal at the breakdown to trigger three points from O’Sullivan.

Michael’s came back after Byrne’s smart kick was grounded by replacement right wing Rob Russell to squeeze the game to 22-18 in the 61st minute.

With just four points in it, the pressure was on St Michael’s to score. However, when St Michael’s scrumhalf Peter O’Beirne was pressed for time at the base of a scrum, Hawkshaw came hard and fast to pick off his pass and sprint away for the insurance try, which was duly converted by O’Sullivan.

Jordon Ibe has been ‘in a dark place’ with depression 09:10
Tokyo under ‘real pressure’ amid rumours of Olympics cancellation 07:20
Jerry Kiernan’s death felt beyond athletics; tennis stars show their full sense of entitlement 07:08
Brandon Nagy reels off 10 birdies to lead at American Express 06:41
Defeat to Burnley ‘a massive punch in the face,’ says Klopp 06:34
Crossword Get access to over 6,000 interactive crosswords