France’s power shows through as they edge out Scotland 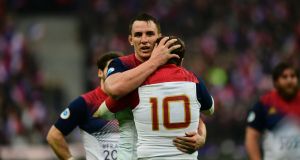 Another near miss to add to the collection. Bloodied, but unbowed, Scotland eventually succumbed to France’s suffocating power after giving Les Bleus an almighty scare on their own turf. It will be little consolation for Scotland but, until Camille Lopez’s two late penalties, the visitors had stood toe to toe with France and had threatened a first win here since 1999. Instead the wait goes on.

Finn Russell will not shake his missed conversion from in front of the posts out of his system for a while yet; for France it is a welcome win indeed. Eventually, despite Hamish Watson’s heroics at the breakdown, France’s forward might told – it had already done for Greig Laidlaw, John Barclay and John Hardie, all of whom limped off through injury. Still, Scotland were ahead after Tim Swinson’s second-half score to add to Stuart Hogg’s in the first half but the hosts, who managed just one of their own through Gael Fickou, are up and running for 2017.

The match then settled into something of a rhythm early on. The gain-line belonged to France, their beastly back row made sure of that so Scotland had to find ways around Loann Goujon, Kevin Gourdon and Louis Picamoles. Watching them try was captivating and if it was not done at speed then France consistently drove them backwards. Thankfully for Scotland, Russell had significantly more involvement in the first half alone than against Ireland while Huw Jones continues to enhance his growing reputation at centre. When he straightened after some patient Scotland buildup on 17 minutes, Hogg was outside him on the right and the full-back jinked his way past Baptiste Serin to mark his 50th cap in style.

Laidlaw’s conversion struck the crossbar however and when Lopez knocked over his second penalty – France’s battering rams consistently made yards and forced Scotland to infringe at the breakdown – the hosts were ahead.

It was not a match without mistakes – far from it. Scott Spedding’s decision to take a lineout quickly was a terrible one – France were too often guilty of playing too much in their own half – while Zander Fagerson, while clinging on at the scrum, was guilty of a horrible knock-on. Laidlaw then limped off on 25 minutes and his replacement, Ali Price, introduced himself to Lopez by shoving him in the back after France had been called up from crossing. The referee, Jaco Peyper reversed the penalty but Lopez too struck woodwork.

By this stage France were having some joy down the right. Lopez was linking well with his Clermont team-mate Noa Nakaitaci while Picamoles was showing that he has delightful footwork to match his brute force. Sure enough, France’s first try came on the right, after Spedding had gone close, Fickou dived past Hogg in the corner.

Lopez knocked over the conversion but rather than buckle – and considering the working over that had been getting you would not have been surprised – Scotland responded immediately. Hogg claimed an excellent restart and Russell, assuming kicking duties, brought the visitors back to within five. By half-time the gap was two – Russell on target again but not before Barclay also hobbled off and the Scotland fly-half had escaped any sanction despite appearing to take out Nakaitaci in the air.

Almost immediately after the interval, Hardie, on for Barclay, thundering into Sébastien Vahaamahina and came off second best, so Swinson entered the fray at blindside. By trade Swinson is a second row but his support line for his try, just a couple of minutes later, was textbook. Russell’s offload sold Virimi Vakatawa and freed Tommy Seymour on the right. His chip ahead wrong-footed Spedding and Seymour regathered before feeding Swinson, who galloped in under the posts. Russell inexplicably missed the conversion though and France were soon level at 16-16 after another Lopez penalty.

The next score felt pivotal so it was not surprising to see both full-backs have a go at goal from long-range penalties – Spedding on halfway, Hogg a couple of metres inside his own half but, while both had the distance, neither had the accuracy. Players from both sides became increasingly anxious – Picamoles fired a forward pass to Fickou to waste another excellent turnover from Gourdon – but not as concerned as the crowd, who were not impressed at Peyper’s decision to award against France at the breakdown. Watson had a key role in that, picking up from the 50 minutes in which he had impressed against Ireland.

In the final quarter, however, France flexed their muscles again, Emboldened by a bulldozing rolling maul, Lopez kicked a penalty, wide on the left but within his range, to the corner. Scotland scrambled but conceded another in front of the posts, only for France to opt for the scrum and Rémi Lamerat spilled the ball as he stretched for the line.

It proved a temporary respite. Richie Gray was penalised for going off his feet with eight minutes to go and this time Lopez took aim at goal and slotted the ball through the posts. Hex did so again soon after to settle matters.