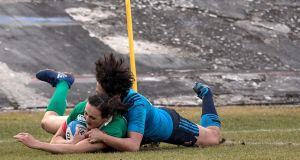 A moment of rugby clarity defined Ireland’s afternoon in the picturesque Stadio Tommaso Fattori in L’Aquila, transforming a potentially painful postscript of missed opportunities into a bonus-point victory.

Just as they had done in Scotland, the Irish side pilfered a fourth try at the death. The clock was in the red when Norah Stapleton flighted a cross-kick towards the opposite touchline. Ireland’s right wing Hannah Tyrrell showed great patience to await a kind bounce and then took off, slaloming one way, then another on an 80-metre run to touch down in the corner.

The accuracy and composure that underpinned the try were characteristics that Ireland lacked for the opening 40 minutes. They were also lacking after they scored three tries in a 10-minute passage from the 50th to 60th minutes, slipping back into their errant ways until the last play of the game.

The first half was a morass of errors from both sides and the interval score-line of 3-3 reflected that lack of cohesion. However, the introduction of replacement scrumhalf Mary Healy and Sophie Spence helped to facilitate better decision-making and accuracy.

Ireland coach Tom Tierney smiled when asked what message he relayed to his charges to facilitate the improvement. “Just to tidy up on the accuracy. We created a lot of things but we tried to play an expansive game that when things don’t quite come off, it puts the next play or the next time we have an opportunity under the microscope,” he said.

“I told them to relax and that it was all about the accuracy. It was a case of holding on to the ball and getting the first score. Thankfully we did that to a certain extent in the second half. Again, there were a few opportunities where we put ourselves under pressure when the easier thing to do was score.

“That’s the challenge but we are getting there. The style of rugby we are trying to play is easy on the eye; when it’s done right, it is effective. When the accuracy isn’t there you’d nearly pull your hair out sometimes.”

When Ireland needed most, the senior players stepped up. Jenny Murphy carried superbly and put in a couple of thunderous tackles, prop Lindsay Peat kept the ball alive time and again and the try-scoring Leah Lyons demonstrated a wonderful work rate on both sides of the ball.

Marie Louise Reilly guaranteed possession out of touch when it mattered most and Ciara Griffin and captain Paula Fitzpatrick got through a ton of work.

Then there were Alison Miller and Claire Molloy. Miller was outstanding with ball in hand, fending off multiple tacklers and making metres when none seemed likely. Her reading of the game defensively was also vital, stepping in to make several tackles.

Molloy though deserved the accolade of the game’s best player on a day when she won her 50th cap. Her work at the breakdown, in carrying ball, beating players and supporting her teammates was stunning by any barometer. She was invariably the player that gave Ireland momentum.

Typically she preferred to credit others rather than dwell on her own display. “We took away the bonus point even though we didn’t perform as well as we should have. There are still mistakes that we need to correct and take into the next day. From two results we have 10 points and are sitting top of the table,” she said.

“There were a couple of shaky moments but we settled in and when it eventually started coming off, we created a little more by getting through the phases. We are disappointed with the first half but in the second half we showed that, when we got our handling right and there were less errors, how threatening and dangerous we could be out there.”

She laughed when asked for her take on the game’s final stanza. “It seems to be our standard play: last-minute excitement. It was superb vision from Norah [Stapleton]; we know she has a cool head and is a great operator.

“There are not many 10s in the world that would see that option and take it. Hannah [Tyrrell] finished brilliantly. She’s just off a plane from Singapore – she was in Australia with the Ireland Sevens – and she was scoring a bonus point try for us. We are just delighted to have her this weekend.”