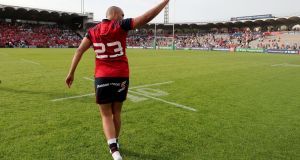 Simon Zebo: in 38 minutes he had more touches on the ball than Andrew Conway and Keith Earls each had in 80 minutes. Photograph: Dan Sheridan/Inpho

Ultimately they were two relatively anti-climactic semi-finals, but anyone associated with Leinster and Racing won’t be bothered about that.

Leinster’s form in this season’s competition is such that they are more capable of doing what they did to the Scarlets than anyone else, but while Racing have clearly improved and gathered momentum, why Munster didn’t turn up until it was too late is a little mystifying.

Amongst the questions to emerge from the weekend, that is top of the list. Was it the heat? Their hectic recent travel schedule? Something mental?

Defensively, they were beaten in collisions, fell off tackles, allowed offloads and, of course, were exposed on their left flank by Teddy Thomas in particular.

Like a puncher caught on the chin, this perhaps left them a little scrambled and had a ripple effect on Ian Keatley and their attacking game, which became bedraggled and shapeless at times. What was with two drop goals attempts a few phases after kicking a penalty into the corner? Did they think they had a penalty advantage?

Had Munster not fallen 21-3 behind they might have felt less compelled to chase the game through seven-pointers. In times of trouble, Munster can usually turn to their maul, but from five penalties kicked into the corner, four were lost and the other was retrieved by Ian Keatley.

They won another three.

But this denied them five mauls from five metres out, before they eventually scored off one. That’s huge. Johann van Graan, Jerry Flannery and Felix Jones will surely be asking themselves about their decision to promote Niall Scannell ahead of Rhys Marshall.

And ditto the decision to leave Simon Zebo on the bench. This was, apparently, strictly a form decision. But Zebo is Munster’s all-time leading try scorer and their most talismanic and creative figure as well as their best finisher. It was, as Brian O’Driscoll noted, strange and unMunster-like.

It was made to appear even more curious by the impact Zebo had. Alex Wootton was unfortunate in that he was left so exposed to the footwork of Thomas, and while he missed three tackles, so too did Peter O’Mahony, who didn’t look himself for whatever reason.

The tide had admittedly turned by the time Zebo came on, and whereas Wootton received the ball only three times – making two runs and one pass – in 38 minutes Zebo had more touches on the ball – seven runs, one try, six passes and two kicks, one of which led to a try – than Andrew Conway and Keith Earls each had in 80 minutes, as he popped up across the line. By the end, his demotion was even harder to fathom.

Semi-finals require experience in the back three. Leinster learned this lesson from last season, and against the Scarlets they opted for an experienced back three of Fergus McFadden, Rob Kearney and Isa Nacewa.

Munster’s lack of accuracy and execution was also in the starkest of contrasts to Leinster, especially with ball in hand, in contact and hence at the breakdown. Straight after the restart, Leinster won three rucks in a row where the ball emerged almost before the ruck had formed. They’re a machine.

Admittedly, by coming from behind to beat Clermont away from home, and blitzing Munster in the first half hour, certainly Racing have emerged as the biggest danger to Leinster of any side in the Top 14. They also have happy memories of finals in Spain, having beaten Toulon in the 2015-16 French Championship final at the Camp Nou in front of 99,124 spectators.

This also begs the question as to why EPRC didn’t choose a bigger city for the European Champions Cup final in Spain or elsewhere. Choosing Bilbao may have felt like a clever idea to them at the time, but even though it’s going to be a guaranteed sell-out, it doesn’t look too clever now.

Three- and four-star hotels in the city centre are charging €1,200 to €2,000 for two nights, and the equally extortionate pricing by airlines are highlighted elsewhere.

Surely it behoves tournament organisers to only confirm future hosting rights in return for agreements or even legislation to prevent such rip-offs. The price hikes for accommodation in Bilbao, and for travel to the city, only adds to the impression that the authorities think rugby supporters can somehow blithely live with such hikes. That ain’t so.

As for the notion of Joey Carbery or Ross Byrne going to Ulster, or that Joe Schmidt and David Nucifora would have applied any pressure on them or Leo Cullen for this to happen, that seems like a non-runner. The decision starts and ends with the players. Both Carbery and Byrne will have clauses in their contract stipulating that they are not obliged to move provinces, and neither will be inclined to leave Leinster the way they have been going in the last couple of seasons.

Nor, one imagines, are they what Ulster are looking for. With only Johnny McPhillips in their ranks, Ulster need an experienced outhalf. Danny Cipriani and Quade Cooper could apparently be on the market, but one doubts they would fit either. Ulster require a steady hand on the tiller, a Jimmy Gopperth type outhalf.

If one player underlined why Leinster looked a step ahead of the rest over the weekend, once again it was Johnny Sexton. The variety of his running and kicking game, and the accuracy of his execution, continually contrived to keep the Scarlets on the back foot. He even chipped in with his fourth try of Leinster’s Euro campaign.

All around benefitted, not least Jamison Gibson-Park inside him, who had a fine game. But Sexton’s performance was another reminder that when it comes to semi-finals, experience counts, as does quality of course.