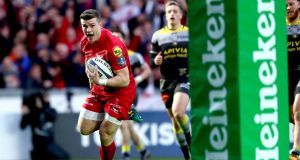 Leinster meet the Scarlets in the semi-finals of the European Champions Cup at the Aviva Stadium on Saturday. The ground will be full, as it would be were its capacity closer to Twickenham’s 82,000 than below 52,000. Irish rugby is where the game in Wales aspires to be and Europe was the vehicle that drove them there.

Leinster used the old Lansdowne Road in the early years of the then Heineken Cup in the second half of the 1990s. When they took on Leicester there in 1996, a crowd of 3,500 turned up; in the same year, Munster attracted 1,500 to Musgrave Park for the visit of Milan. At Donnybrook in 1999, 4,500 watched Llanelli defeat Leinster.

Ulster’s triumph in the European Cup in 1999 kick-started Ireland’s romance with Europe. If crowds had generally been low in the early years of the Heineken Cup, within a few years of the new century Munster were filling Thomond Park and in January 2004 Leinster drew more than 23,000 to Lansdowne Road for their group match against Cardiff Blues.

That was the first season of regional rugby in Wales after the contentious decision to make club rugby semi-professional and create five new sides: spreading the money and the players more thickly, it was argued, would improve standards and drive success in Europe.

Ireland was Wales’s model but the provinces had existed for more than a century. Three of the four regions (Celtic Warriors were disbanded after one campaign) kept a club name in their title but far from attracting new support, attendances fell. Wales’s only European Cup finalist remains Cardiff in 1996 when nine teams from France, Wales and Ireland along with two from Italy and one from Romania took part.

The Scarlets are 80 minutes away from going where no region has gone before, although they have to beat the form team in Europe to get there. Wales lost at the Aviva Stadium in the Six Nations, more narrowly than the 37-27 scoreline suggested because they were within a completed pass in the final minute of taking the lead, but also more comprehensively because they spent most of the match defending, with the home side creating almost three times as many rucks.

With Cardiff Blues reaching the semi-finals of the Challenge Cup – they take on Pau at the Arms Park before the Scarlets face Leinster – the regions are making more than a ripple in Europe but years of neglect from the centre have taken their toll. While the Irish provinces have always been closely tied to their union, it has been so in Wales only for the last two years.

The former Ireland and Leinster wing Denis Hickie observed this week that the academy system in Ireland is producing virtually all the players who break into provincial teams. Leinster lead the way, focusing on education as well as rugby. Tadhg Furlong, Garry Ringrose and Jordan Larmour hit the ground running.

It is different in Wales where the union’s chairman, Gareth Davies, is striving to make the executive side slimmer and more responsive, although his plan to model the governing body on regions rather than the antiquated district system was rejected by his board. The Welsh Premiership is also getting another revamp having largely failed in one of its objectives of providing access to the professional game.

“Semi-professional teams need to provide more players otherwise we will have to go overseas more,” said the Scarlets’ coach, Wayne Pivac, a New Zealander whose four years with the region have proved transformative. “There is still room for the late developer and we have to develop players holistically, going beyond what they do on a rugby field.”

Pivac, like his fellow New Zealanders Sir Graham Henry, Steve Hansen and Warren Gatland before him was surprised by the skill level he encountered in a country which for the first 100 years of its rugby existence enjoyed a close rivalry with New Zealand, two rugby countries who developed highly skilled players.

“The standard of rugby outside the regional game was not what I expected,” he said. “I thought it would be higher in terms of skill, athleticism and conditioning. I did not expect the gap with the professional game to be so significant. That has to be addressed.”

Three of Ireland’s provinces have bigger budgets than the regions, allowing them to hold on to players so that their national side contain only those who are based in the country. The Scarlets took a chance on the second-row Tadhg Beirne when he was released by Leinster two seasons ago but he is returning to Munster next season to pursue his dream of winning a cap.

In contrast, over this decade the Scarlets have lost players of the calibre of George North, Jonathan Davies, although he returned from Clermont Auvergne after two years, and Rhys Priestland, while Liam Williams joined Saracens last summer.

“Finance has a lot to do with it but we are involved in the game for the same reasons amateurs were,” Pivac said. “It is a gladiatorial sport and a certain type of person plays the game: that does not change whether you are paid or not. It is more brutal now, although there was more foul play then, but the damage that can be done now with all the collisions, you have to treat that type of person a certain way.”

It helps Pivac that he is operating with a union that now wants the regions to succeed and is trying to make that happen. The wasted years mean they are still sailing against the current but at least now there is not a fight for the tiller.